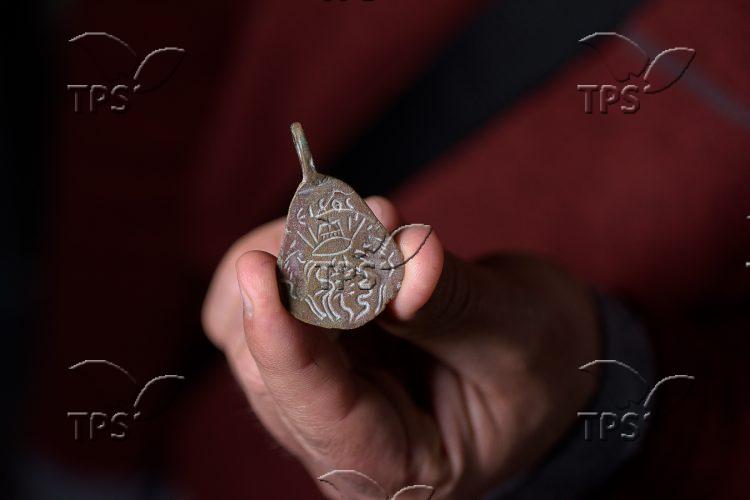 Jerusalem, 26 May, 2021 (TPS) -- Some 40 years after its find, an ancient amulet bearing the Divine Name and intended to ward off demons was handed over to the Israel Antiquities Authority (IAA).

The fascinating amulet, dated to the Byzantine period some 1,500 years ago, was found at Arbel, where there was once an ancient Jewish community.

“The fact that the amulet was found on the site of a Jewish settlement that contained a synagogue in the fifth-sixth centuries CE suggests that Jews also carried amulets at the time,” said archaeologist Dr. Eitan Klein of the IAA.

The necklace bronze pendant was used as a protective amulet in Talmudic times in the Galilee and attests to its owner’s beliefs and fear of the evil eye and harmful demons.

The obverse bears the figure of a rider on a galloping horse. The rider’s head is encircled with a halo and he thrusts a spear down toward a female figure lying on her back. Engraved in a semicircle above the rider is a Greek inscription that reads: ‘The One God who Conquers Evil’.

An eye depicted on the reverse is pierced by arrows and by a forked object. The eye is threatened from below by two lions, a snake, a scorpion and a bird. On the upper part of the same side is the abbreviated Greek inscription: ‘One God’.

Klein, Deputy Director of the Antiquities Theft Prevention Unit, said that the amulet is “part of a group of fifth–sixth-century CE amulets from the Levant that were probably produced in the Galilee and Lebanon.”

“This group of amulets is sometimes called ‘Solomon’s Seal’ and the rider is depicted overcoming the evil spirit – in this case, a female identified with the mythological figure Gello/Gyllou, who threatens women and children and is associated with the evil eye,” he explained.

“The eye on the reverse is identifiable as the evil eye, being attacked and vanquished by various means. The amulet was therefore probably used to guard against the evil eye, possibly to protect women and children,” he added.

During the Byzantine period, Arbel in the north was a Jewish town and is often mentioned in historical sources from the Talmudic period. It had a linen-production industry and many sages visited and taught there.

“Although scholars generally identify the wearers of such amulets as Christians or Gnostics, the fact that the amulet was found within a Jewish settlement containing a synagogue in the fifth-sixth centuries CE may indicate that even Jews of the period wore amulets of this type for protection against the evil eye and demons,” says Klein.

It was found some 40 years ago by the late Tova Haviv, one of the first members of the moshav – has was now given to the National Treasures Center by a family member.

Klein thanked the amulet’s donor for “demonstrating good citizenship” and appealed to anyone who has previously found ancient artifacts to hand them over to the National Treasures Center, since “objects of this kind tell the story of Israel’s history and heritage and they belong to all Israel’s citizens, both legally and in terms of their cultural value.”