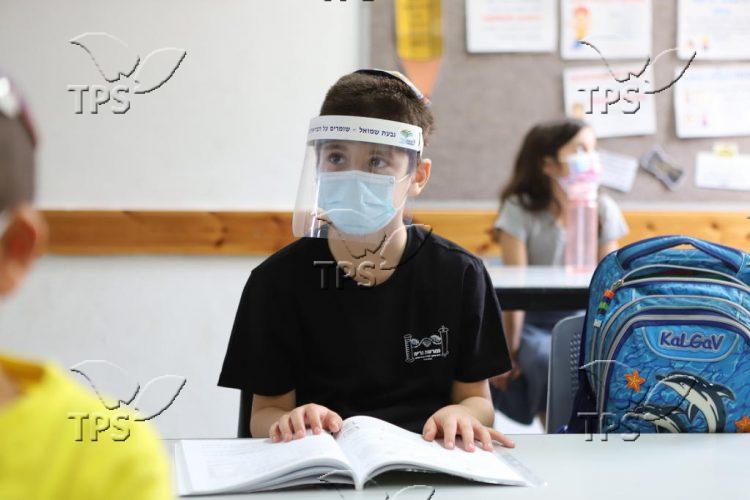 Photo by Eitan Elhadez-Barak/TPS on 1 November, 2020

Jerusalem, 20 June, 2021 (TPS) -- At least 45 children have been found to have been infected by the Coronavirus (COVID-19) in schools in the city of Binyamina in northern Israel, the Ministry of Health announced Saturday.

The outbreak was detected following an extensive sampling operation, which began with the discovery of the first sick child. Different age groups in the school were tested, and another nine cases were discovered, all but one suffering from light symptoms.

The sampling operation was expanded to additional schools and another 35 verified cases were found.

The source of the outbreak is still under investigation, but there is probably a connection to a family that recently returned from abroad.

All the samples were sent for analysis at the National Center for Genomic Technologies and it appears that the Indian variant is responsible for the outbreak.

An IDF report shows that the Indian variant is 60% more contagious than the British stain, the dominant one in Israel, and causes 2.5 more hospitalizations. However, the Pfizer-developed vaccine, with which the majority of Israelis were vaccinated, is effective against this variant.

This variant has previously been discovered in Israel.

The Ministry of Health called on the residents of Binyamina to be tested to prevent the spread of the virus in the community.

The ministry further called on those who ae obligated to self-quarantine to do so according to the procedures, especially those returning from abroad.

Following the outbreak in Binyamina and another one in a school in the city in Modi’in last week in which some 20 students were infected, the Ministry of Health’s director-general Prof. Hezi Levy signed an order on Sunday which requires all students in the cities of Binyamina and Modi’in to wear masks in school.

The Ministry of Health stated that the obligation to wear masks is in all areas of the school, including open space.

The requirement to wear masks in schools was canceled only last Tuesday.

The majority of Israel’s adult population is vaccinated and the virus has almost completely disappeared in the country. However, the majority of children under the age of 16 are not vaccinated, and only recently were the vaccines made accessible to the 12 – 16 age group.

The Ministry of Health updated Sunday morning that it documented 46 new COVID-19 cases over the weekend.

23 of the patients hospitalized with Corona are in serious condition, 17 of them are on life support. The numbers have been steadily dropping. Most Corona wards in Israeli hospitals have been closed.