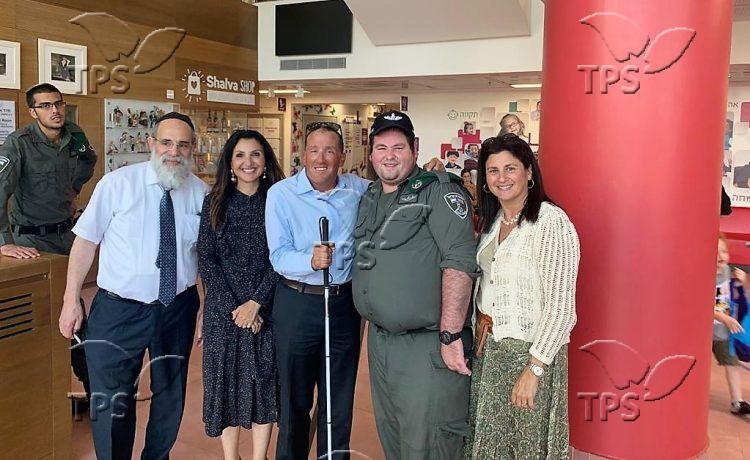 Jerusalem, 28 April, 2021 (TPS) -- Michigan Supreme Court Justice Richard Bernstein is usually occupied with the most sensitive cases and gives the final word on the court’s most complex issues.

However, while visiting Israel, Justice Bernstein has a different mission.

Bernstein, 46, is the first blind justice to be elected by voters statewide to the Michigan Supreme Court. He has been visually impaired since birth due to a genetic disorder called retinitis pigmentosa.

While working as a lawyer, Bernstein was known as a tireless advocate for people with special needs, and much of his legal work has focused on protecting the rights of people with disabilities.

Bernstein is now taking this life mission to a new level and seeks to export Israeli knowledge, experience, programs, and treatment of special needs people to the Arab world, beginning with the United Arab Emirates (UAE).

He has partnered with Fleur Hassan Nahoum, Deputy Mayor of Jerusalem and Co-founder of the UAE Business Council and Gulf Israel Women’s Forum to promote this project.

Speaking to TPS, Judge Bernstein explained that the Abraham Accords signed between Israel and the UAE in September have far-reaching implications for everyday life.

“The incredible thing about the Abraham Accords is its human face and what it means for real people. It’s not just policy, and will transform the lives of real people, who for the most part, live in the shadows,” he emphasized.

The program he has in mind will shed light and enhance the lives of countless individuals.

Israel has developed several programs and protocols tailored for its special needs population, and Judge Bernstein seeks to export three elements from Israel to the UAE.

The first is work opportunities and special work environments for people with special needs. The programs serve as facilitators for potential employers, serving as knowledge hubs, and showcase the various benefits special needs people bring with them to work.

As an example, he mentioned Access Israel, a non-profit organization whose main mission is to promote accessibility and inclusion to improve the quality of life of people with disabilities and the elderly.

This, in turn, encourages government to improve its programs and educational facilities, “because it’s leading to something,” to productivity.

All this leads to independence and a better life for special needs people, he said.

A leader in this field is Israel’s Shalva, the largest and most diverse organization in the world in understanding and caring for people with special needs.

The second element is competitive sports for the disabled. Judge Bernstein has participated in 24 marathons around the world, including twice in the Jerusalem marathon, and one Iron Man completion.

Several Israeli organizations have expressed interest in collaborations with the UAE.

The third part is specially-tailored technology that the government and Israeli companies have developed. The Israeli Innovation Authority provides special incentives to companies that develop tech to improve the lives of disabled individuals.

While the planned collaboration is between Israel and the UAE, he noted that the UAE is the “nucleus where one goes to transform the entire Arab world,” and therefore the program has far-reaching implications.

Justice Bernstein further highlighted the very positive response he has encountered while sharing these ideas with the royal family in the UAE. While visiting the UAE, where he spent several months, he encountered a high level of enthusiasm and excitement over these ideas at all levels of government and leadership.

“They have the drive and ambition to do this, and Israel has the technical know-how to bring this to reality. It is the absolute perfect partnership,” he said.

The UAE officially refers to people with disabilities as “people of determination,” a term coined in 2016.

He has already received invitations from several Arab countries to develop such programs in their countries, following the excitement in the UAE.

He shared that during his meetings in the UAE, the participants expressed great anticipation for a new and better future for their children.

“This is transformative for the entire region,” he emphasized.