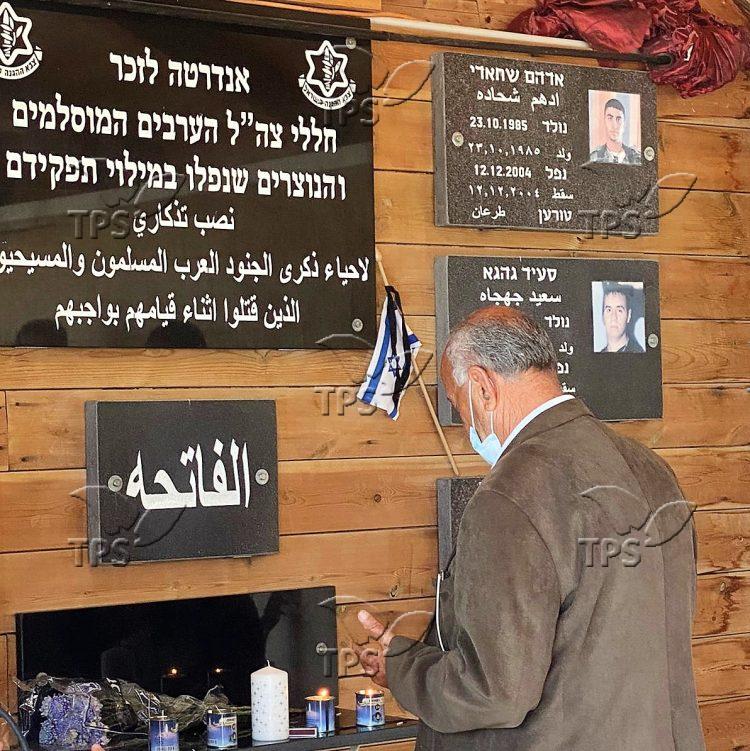 First and Only Memorial Day Ceremony Held in Arab-Israeli Society

Jerusalem, 13 April, 2021 (TPS) -- The first and only Yom HaZikaron, Memorial Day, ceremony held by the Israeli-Arab society took place in Arara in northern Israel on Tuesday.

The event took place at the “Said’s Tent for Equality and Peace” monument, which commemorates the Arab IDF casualties, led by the “Together – Vouch for Each Other” organization.

At the ceremony, Yusuf Jahja, the father of the late Sergeant Saeed Jhaja, who fell during operational activity in Rafah in 2004, spoke with Maj. Gen. Hisham Abu Reya, the first Arab-Muslim officer in the IDF, Lorena Khateeb, a Druze social activist, and Yoseph Haddad, co-CEO of Together – Vouch for Each Other and himself an Israeli-Arab IDF soldier.

The ceremony was attended by Muslim and Christian Arabs, Druze and Jews who came to honor and commemorate the memory of IDF fallen soldiers from the Arab society on the eve of Yom HaZikaron, which commences Tuesday night.

A police delegation also came to attend the ceremony, led by Eran Levy, commander of the Iron Station, who also spoke at the ceremony.

Four memorial candles were lit in memory of the Jewish, Muslim, Christian and Druze IDF casualties, and a fifth candle, a candle of hope for the unity of Israeli society.

Yoseph Haddad, the ceremony’s initiator, said that “it is very exciting to hold the Memorial Day ceremony in Arab society, and to honor the memory of the Arab fallen together with the rest of the Israeli fallen.”

“This is a sad and painful day for all Israeli society. We all need to bow our heads on this day and remember those heroes who fell for the country of us all, and take care to preserve it and make it better and more united. May their memory be blessed, may Allah have mercy on them,” he concluded.

Together – Vouch for Each Other was founded in 2018 by a group of young Israeli Arabs – Christians, Muslims, Bedouin and Druze, who felt determined to bring about change in the Israeli-Arab sector and adopt a positive direction vis-à-vis Israeli society and the country.