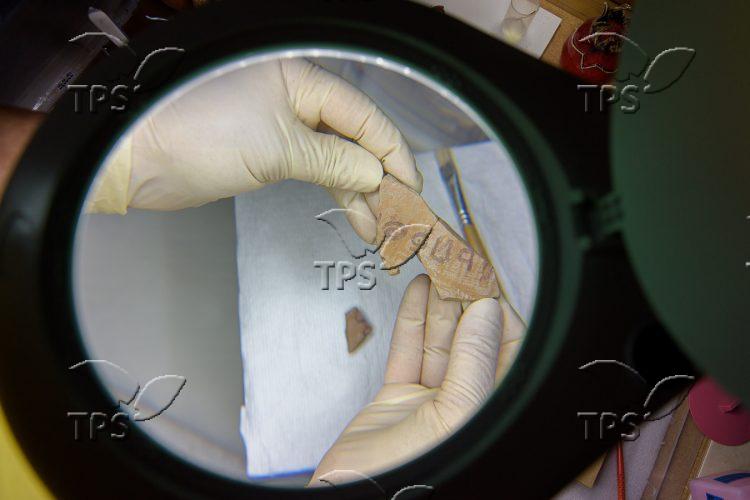 In First, Inscription Dating to Biblical Judges Era and Relates to Book of Judges Found in Israel

Jerusalem, 12 July, 2021 (TPS) -- For the first time in history, an inscription dating from the time of the biblical Judges some 3,100 years ago and relating to the Book of Judges has been recovered from excavations at Khirbat er-Ra‘i, near Qiryat Gat.

The rare inscription bears the name ‘Jerubbaal’ in alphabetic script and dates from around 1,100 BCE. It was written in ink on a pottery vessel and found inside a storage pit that was dug into the ground and lined with stones.

The site, which is located at the Shahariya forest, has been excavated every summer since 2015 and the current excavation season is its seventh. The excavations are being conducted on behalf of the Institute of Archaeology at the Hebrew University of Jerusalem, the Israel Antiquities Authority (IAA), and Macquarie University in Sydney, Australia, under the direction of Prof. Yossef Garfinkel, Sa‘ar Ganor, Dr. Kyle Keimer and Dr. Gil Davies.

The inscription was written in ink on a jug – a small personal pottery vessel that holds approximately one liter, and may well have contained a precious liquid such as oil, perfume or medicine. Apparently, much like today, the vessel’s owner wrote his name on it to assert his ownership.

The inscription has been deciphered by epigraphic expert Christopher Rolston of George Washington University, Washington DC. It clearly shows the Hebrew letters yod (broken at the top), resh, bet, ayin, lamed, and remnants of other letters indicate that the original inscription was longer.

Prof. Garfinkel and Ganor explained that “the name Jerubbaal is familiar from biblical tradition in the Book of Judges as an alternative name for the judge Gideon ben Yoash.”

Gideon is first mentioned as combatting idolatry by breaking the altar to Baal and cutting down the Asherah pole. In biblical tradition, he is then remembered as triumphing over the Midianites, who used to cross over the Jordan to plunder agricultural crops. According to the Bible, Gideon organized a small army of 300 soldiers and attacked the Midianites by night near modern-day Ma‘ayan Harod.

In view of the geographical distance between the Shephelah, where the inscription was found, and the Jezreel Valley where Gideon was active, “this inscription may refer to another Jerubbaal and not the Gideon of biblical tradition, although the possibility cannot be ruled out that the jug belonged to the judge Gideon. In any event, the name Jerubbaal was evidently in common usage at the time of the Biblical Judges,” they said.

Inscriptions from the period of the Judges are extremely rare and almost unparalleled in Israeli archaeology. Only a handful of inscriptions found in the past bear a number of unrelated letters. This is the first time that the name Jerubbaal has ever been found outside the Bible in an archaeological context – in a stratum dated to around 1,100 BCE, the period of the Judges.

“As we know, there is considerable debate as to whether biblical tradition reflects reality and whether it is faithful to historical memories from the days of the Judges and the days of David,” say the archaeologists. “The name Jerubbaal only appears in the Bible in the period of the Judges, yet now it has also been discovered in an archaeological context, in a stratum dating from this period. In a similar manner, the name Ishbaal, which is only mentioned in the Bible during the monarchy of King David, has been found in strata dated to that period at the site of Khirbat Qeiyafa. The fact that identical names are mentioned in the Bible and also found in inscriptions recovered from archaeological excavations shows that memories were preserved and passed down through the generations.”

The Jerubbaal inscription also contributes to the understanding of the spread of alphabetic script in the transition from the Canaanite period to the Israelite period. The alphabet was developed by the Canaanites under Egyptian influence in around 1,800 BCE, during the Middle Bronze Age. In the Late Bronze Age (1,550–1,150 BCE), only a few such inscriptions have been found in Israel, most from Tel Lachish near present-day Moshav Lachish. The Canaanite city of Lachish was probably the center where the tradition of writing the alphabet was maintained and preserved.

Canaanite Lachish was destroyed around 1,150 BCE and remained abandoned for about two centuries. Until now, there was considerable uncertainty as to where the tradition of the alphabetic script was preserved after the fall of Lachish.

The newly-discovered inscription shows that the script was preserved at Khirbat er-Ra‘i — roughly 4 km from Lachish and the largest site in the area at the time of the Judges — during the transition from the Canaanite to the Israelite and Judahite cultures.

Additional inscriptions, from the time of the monarchy (tenth century BCE onwards), have been found in the Shephelah, including two from Khirbat Qeiyafa and others from Tel es-Safi (Tel Tzafit) and Tel Bet Shemesh.