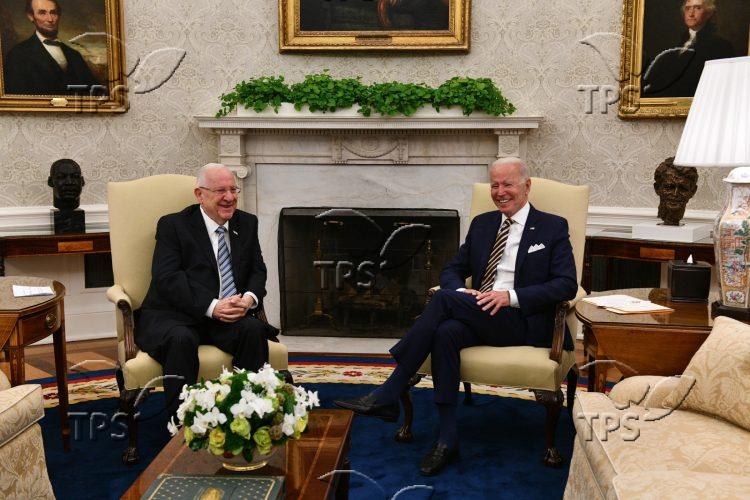 Jerusalem, 29 June, 2021 (TPS) -- Israel’s President Reuven Rivlin met on Monday with US President Joe Biden at the White House in Washington DC, his last diplomatic trip as president before leaving office next month.

Rivlin departed on Saturday night on a farewell visit to the US at the invitation of President Biden.

Biden stated that his “commitment to Israel is iron-clad. It’s real, it’s something that I always say is fundamental and this includes an unwavering commitment to your self-defense.”

“What I can say to you is Iran will never get a nuclear weapon on my watch,” he declared.

“I also want to be clear that my team and I are already working closely with the Israeli government that took office earlier this month. We are looking forward to hosting Prime Minister [Naftali] Bennett at the White House very soon,” he said.

Such a visit is expected in the coming weeks.

Speaking of Israel’s recent peace agreements signed as part of the Abraham Accords formulated by former President Donald Trump and former Prime Minister Benjamin Netanyahu, Biden said that the US “fully supports normalization of relations between Israel and Middle Eastern countries” and the US is “really looking forward to building back a wider plot of peace and stability.”

Rivlin said that Biden’s words “deepen the understanding that we have a great friend in the White House.”

Rivlin thanked Biden for his military and diplomatic support, and for his personal involvement during the IDF’s recent counterterrorism Operation Guardian of the Walls against Hamas in the Gaza Strip in May.

Talking about the Iranian nuclear threat, Rivlin emphasized that “this is the gravest strategic threat faced by the free world” and that Iran’s policy, particularly after the recent elections in which hardliner Ebrahim Raisi became president of the Islamic Republic, is “dangerous and extremist.”

Rivlin further stressed Israel’s position that the Iranian nuclear deal, as it currently stands, “endangers the State of Israel,” and the concern about Iranian military build-up on Israel’s borders, evidenced by its arming of Hezbollah with precision missiles and Hamas’ strengthening in Gaza.

The PA has been waging diplomatic warfare against Israel in multiple international forums in recent years and is also working to launch a war crimes probe against Israel at the ICC.

In this regard, Rivlin stressed that the rehabilitation of Gaza after 11 days of warfare in May would only be possible when it was understood that the issue of Israel’s missing soldiers and civilians, held by Hamas, needed to be resolved.

Rivlin reportedly presented Biden with a list of weapons systems and munitions Israel wishes to acquire from the US, including precision-guided bombs.

As a gift, Rivlin presented Biden with a coin from the First Jewish Uprising against the Romans around 70 CE. It is a replica of a coin produced in Jerusalem when it was under Roman siege. On one side of the coin, there are three half pomegranates, with the words ‘Holy Jerusalem’ written around them.

Anat, the president’s daughter who is accompanying him on his visit, presented the Bidens with a pair of mugs made for them by Israeli ceramicist Irit Biran from Sde Warburg. Anat said that local crafts are very important to the family and she was glad to have the opportunity to share with the Bidens the unique artistic skills found in Israel.

Speaking to Biden, Anat told him that she brought a message from her daughters, aged nine and 11, who asked her to thank him for his efforts to save the planet and for what he is doing regarding climate change.

After the meeting with Biden, Rivlin continued to the Congress, where he met House Speaker Nancy Pelosi.

“Congressional support for Israel has always been bipartisan, as you hoped, and will continue to be so, because of the values we share and the security concerns we have in common,” said Pelosi.

Rivlin said that Israel and the US “are friends and partners, and as such we may have disagreements from time to time, but they will never endanger our friendship. Our shared mission crosses party lines.”

Rivlin’s visit to the US came just after IDF Chief of Staff, Aviv Kochavi, spent a week meeting with the US military’s top brass and the heads of the US defense establishment and as Israeli Foreign Minister Yair Lapid and US Secretary of State Antony Blinken met in Rome on Sunday for a quick meeting.

In Washington, Rivlin also met with United Arab Emirates Ambassador to the US Yousef Al Otaiba, who played a key role in advancing the Abraham Accords.

Rivlin is slated to meet with UN Secretary-General António Guterres and foreign ambassadors at the UN, and return to Israel on Wednesday in time for a state reception ceremony for President Dr. Frank-Walter Steinmeier of Germany and his wife on Thursday.