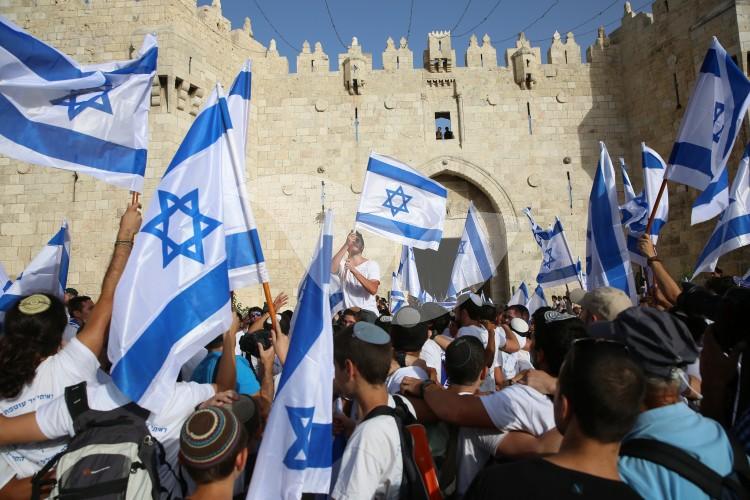 Jerusalem, 5 June, 2016 (TPS) -- Jerusalem (TPS) – Thousands took to the streets of Jerusalem on Sunday to celebrate Jerusalem Day with dancing, ceremonies, and parades held throughout the city and in the Old City in particular.

Jerusalem Day is considered a national holiday in Israel and it draws thousands of visitors from all over the country and the world as it marks the liberation of the Old City of Jerusalem from Jordanian military rule during the Six Day War.

Thousands of young Israelis participated in the Flag Parade, which tends to be one of the more famous and contested events of the day. The Flag Parade is a 25-year-old tradition organized by the national-religious NGO Am KeLavi in which thousands of Jewish youth march through the Old City of Jerusalem carrying Israeli flags.

Jerusalem-based NGO Ir Amim petitioned the Israeli Supreme Court this year to change the parade’s route so that it would not go through the Muslim Quarter.

“The proximity of the march to Ramadan this year makes it particularly disturbing because the residents of the Muslim Quarter will not be able to prepare for their most important holiday. That is a violent and aggressive act, which has the potential to lead to renewed violence,” stated Ir Amim in their petition.

The Supreme Court rejected the petition, but imposed several conditions upon the marchers and on the Jerusalem District Police.

“We have restricted the height of the flags that can be carried through the Old City. Additionally, we will confiscate anything that could be used for vandalism. There are 1,200 policemen monitoring and securing the event,” said Jerusalem District Police Commander Yoram HaLevi.

The Supreme Court also ruled that the parade must leave the Muslim Quarter by 7:00 p.m., one hour before the beginning of Ramadan.

According to the Jerusalem District Police, the event ended successfully and without any exceptional incidents though two Jewish minors were detained by the police for shouting racial slurs at Arabs.

One hundred Israeli activists from the “Tag Meir” organization followed the route of the Flag Parade in the Old City and held a separate “flower parade” where they handed flowers to Arab residents of the Old City as a token of peace and coexistence.