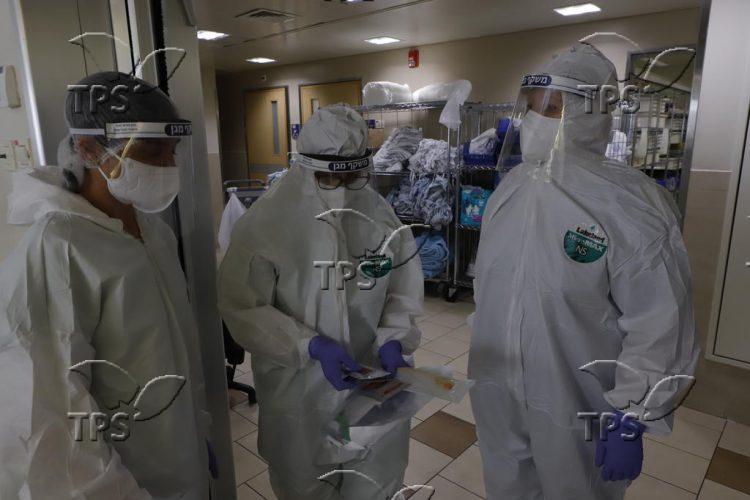 Photo by Eitan Elhadez-Barak/TPS on 4 October, 2020

A new drug developed in Ichilov Hospital in Tel Aviv has succeeded in curing Coronavirus (COVID-19) patients who were on the verge of death and is already gaining worldwide interest.

The Phase 1 drug study for Coronavirus patients was completed with 29 out of 30 patients in moderate to severe condition being discharged from the hospital in just 3-5 days after treatment. The 30th patient took longer to be released but was still cured.

The drug in use is the EXO-CD24, an innovative formula based on exosomes enriched with the CD24 protein, which is given by direct aspiration into the lungs to eradicate the cytokine storm resulting from the COVID-19 virus.

COVID-19 has two main stages in the disease. The first stage is similar to influenza and does not require specific treatment and only supportive care.

Phase two occurs in 5-7% of patients, with risk factors and is characterized by overactivity of the immune system which results in a cytokine storm. Despite the endless efforts, there is no drug that has been proven to be effective in treating Coronavirus, until this development.

“Even if the vaccines perform their function, and even if no new mutations are produced, then still in one way or another the Coronavirus will remain with us. To this end, we have developed a unique drug. An unprecedented event. About six months from the moment the idea was conceived and the technology was invented until it was first tested in humans, in the first clinical phase, “said Prof. Nadir Arber, one of the hospital’s prominent doctors and researchers, who is entrusted with the development of the drug.

“This protein [CD24] is located on the surface of cells and has a well-known and important role in regulating the immune system, “explained Dr. Shiran Shapira, director of the laboratory of Prof. Arber, who has been leading the research on CD24 protein for over two decades.

The medication is given by inhalation, once a day, for only a few minutes, for five days.

Arber explained that the uniqueness of the medication lies in the dual mechanism that acts to inhibit the pathway leading to the immune storm and multiple cytokine secretion. The medication is directed directly to the heart of the storm to the lungs so that unlike many other treatments in the world that are given systematically, and selectively inhibit a particular cytokine or act more widely but cause severe and multiple side effects, EXO-CD24 is given topically, works extensively and has no side effects.

The understanding now in the world is that alongside vaccines, it is very important to develop drugs suitable for the virus and “now there is a lot of research activity on the subject and I am proud that in Ichilov already now, one of the first in the world, we are working in the research field and perhaps bringing the beginning of a Blue-and-White message to a terrible global epidemic,” stated Prof. Roni Gamzo, director of the Ichilov Medical Center.

Arber told Israel Radio that the first phase of the study was “successful, the drug is completely safe and effective. Within a day or two, patients felt they were breathing easily.”

“We are flooded with phonecalls from all over the world,” he shared.

The hospital now plans to broaden the treatment to hundreds of patients.