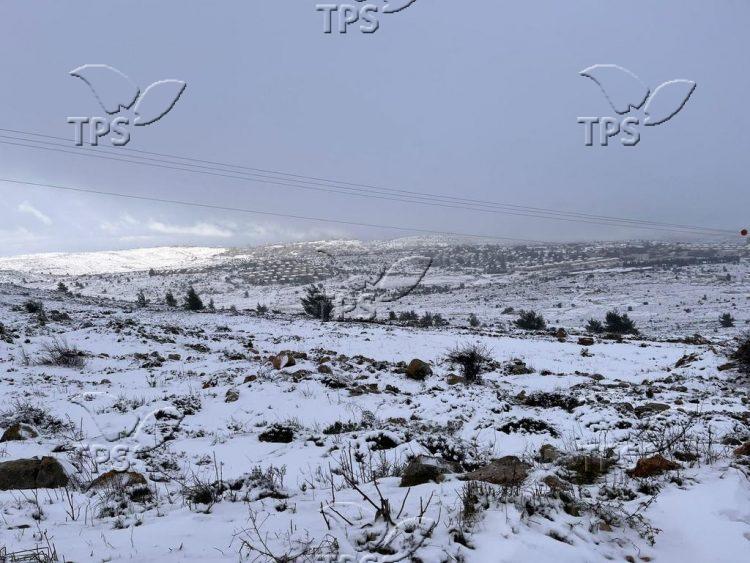 Jerusalem, 30 January, 2022 (TPS) -- An Israeli father and daughter faced an Arab lynching mob on Thursday while they were on their way to play in the snow in the Binyamin region.

High regions in Israel, including the Binyamin area, were blanketed in snow last, in a once-a-year occurrence. Israelis from around the country flocked to these areas to enjoy the snow.

Inbal Orpaz and her father Rami were on their way to the snowy areas in Binyamin when they were surrounded by an Arab mob who attacked them a caused significant damage to their car.

Apparently taking a wrong turn into an Arab village, their car was quickly encircled by dozens of young Arabs who tried to open the doors of the car.

“Then everything happened very quickly,” she recounted. “We heard the first glass shattering behind us. A massive barrage of stones was thrown at us. I shouted ‘enough’ and ‘don’t’ so they would stop, that we do not want to harm them. I wanted to explain to them that we are peaceful people and want to resolve this damn situation, that we are not against them. The words of course did not come out of the mouth. Also, no one was interested.”

“My dad, whose window shattered and scattered in a million small shards, acted with the most impressive composure I have ever seen in my life. Later we realized that he did get hit by the stones during the incident and only at night when we returned home and sorted out the mess a bit, we saw that his door took a very strong blow from a huge rock – miraculously he did not get it in the head,” she shared.

“I do not know what happened in the following moments, and for a moment I lowered my head because stones flew around. At some point, my dog Nina jumped out of the back bench and came in between my legs howling and shaking. Somehow we got out of there. I do not know how to describe it. While driving, as we rode out of the village I turned around to look at the condition of the car. I saw that out of eight windows, five were smashed. The vehicle was full of rocks everywhere and we were covered in glass that shattered on us with remnants of snow,” she said.

“So many miracles happened to us during this lynching. Not much more would have to happen for us not get out of there alive. The car was destroyed, the windows shattered, the doors were full of marks and scratches, and even my glasses were scratched. But other than scratches and dry blows – we left healthy and intact (and with a new trauma for life).”

They went to the police after the attack, and Orpaz says that when the police investigator collected the rocks from the car to take samples from them he was unable to calm down.

“I do not understand how you came out alive, how they did not kill you with such a quantity of stones,” the investigator told Orpaz. “Even at a police station that handles stone-throwing cases, they did not encounter such a lynching and such a quantity of rocks thrown. Ten rocks were found inside the vehicle, some very large, others very sharp. Each of them could kill. They were thrown at us at point-blank by a wild and hateful crowd. Who knows how many rocks did not get into the vehicle.”

This incident was one of the multiple terror attacks that occur in Jerusalem, and in Judea and Samaria on a daily basis. While most attacks end without bodily harm, many do end with significant damage and emotional injury.

In 2021, Arab terrorists carried out some 6,700 terrorist attacks in Judea and Samaria alone, of which 61 were shootings, 18 were stabbings, about 1,100 were fire bombings, and about 5,600 were rock-throwing attacks, a sharp increase over the numbers in recent years, according to data recently published by the IDF in December.