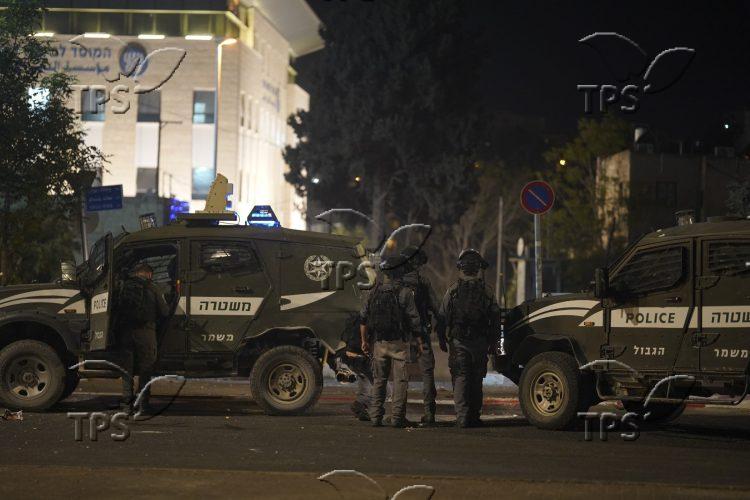 Jerusalem, 25 April, 2021 (TPS) -- Thousands of Muslims rioted at several locations in Jerusalem on Saturday, a continued expression of religious violence during the Muslim month of Ramadan that the capital has been experiencing in recent days.

At Sha’ar Shechem, the Damascus Gate, at the entrance to the Old City, hundreds of Muslims rioted after concluding the evening prayers. The police responded with crowd control means.

Sha’ar Shechem has been the scene of nightly riots that included anti-Semitic attacks on Jewish individuals.

In one such incident, a Muslim attacked an ultra-Orthodox Jew and knocked off his hat. The police arrested the attacker.

At Sha’ar Haprachim, Herod’s Gate, a Border Police officer was attacked with a blow to the face. The policeman required medical treatment and the suspect was arrested for questioning.

At the Rockefeller junction, rioters launched a  firework and threw a rock at a police car, resulting in two police officers being lightly injured and being treated by medical staff.

During a procession of dozens of masked men in the neighborhood of Issawiya, the rioters fired fireworks toward the police. Police dispersed them using riot control means.

The police also clashed with Muslim rioters at other points in Jerusalem. At the Qalandiya crossing, hundreds of rioters threw Molotov cocktails, set fire to tires, and launched fireworks toward the Israeli forces, and at Rachel’s Tomb, Muslims attacked Israeli forces stationed at the holy site.

In both hotspots, the Israeli forces used means to disperse demonstrations and after several hours of activity, the forces managed to disperse the rioters and restore order.

The commander of the Border Police, Superintendent Amir Cohen, arrived at the main activity centers in Jerusalem, met with the commanders and fighters, heard from them about the activity in the sector and “demanded that they strive to face any threat, act professionally and do everything to arrest anyone who attacks civilians or troops.”

Responding to the continued riots in the capital, Prime Minister Benjamin Netanyahu stated that “first of all, we want to ensure law and order. We are maintaining freedom of worship as we do every year, for all residents and for all visitors to Jerusalem.”

“At the moment we demand compliance with the law and I call for calm on all sides,” he added.

Member of Knesset Betzalel Smotrich was angered by Netanyahu’s equation and tweeted that “after countless terrorist incidents and lynchings by the Arab enemy in recent days and after a barrage of missiles from Gaza to the southern communities, Netanyahu called tonight called for “calm on all sides”??? Maybe it’s really time to replace him.”