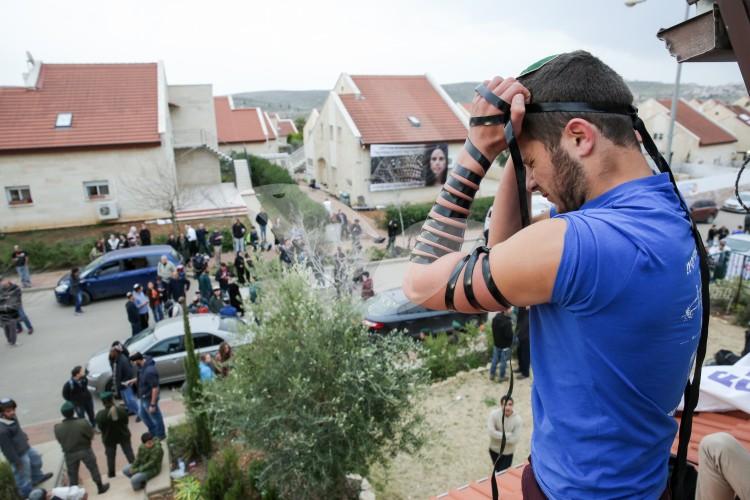 Jerusalem, 28 February, 2017 (TPS) -- For the second time in a month, blue-sweatshirted IDF, Border Police and Israel Police forces faced off with residents of Judea and Samaria and hundreds of teenage protesters as they evicted residents from nine homes in Ofra that were declared illegal by the High Court of Justice.

Inside the homes slated for demolition, local residents slammed the judicial branch for its “blind” approach to the settlement movement and security forces joined local residents and teenage protesers in singing Hatikva, the national anthem, before removing them from the home.

The eviction is the second setback for the settlement movement, and particularly for the Ofra community, in recent weeks. In early February, some 40 families were evicted from the Amona outpost, adjacent to Ofra, after the Court ruled the community was built on privately-owned Palestinian land.

In contrast to Amona, however, the initial stages of the eviction process proceeded mainly without incident. Crying teenage girls allowed themselves to be led by security forces out of the condemned homes after Ofra Chief Rabbi Avi Gisser and Samaria Regional Council Head Avi Roeh spoke to protesters, promising that the settlement movement would “continue building the Land of Israel” and pledging to expand the borders of Ofra following the coming demolition.

In a repeat of the Amona template, hundreds of national-religious teenagers flocked to Ofra Monday to protest the eviction and to show support for residents of the homes slated for demolition. As in previous incidents, protesters barricaded themselves inside homes and prepared a “last stand” on the roofs.

As leaders of Amona did a month ago, Gisser and Roeh both pledged that there would be no repeat of the violent clashes that marred the Amona eviction. In contrast to that incident, however, security forces managed to contain low-level attempts by protesters to break through border police barricades to get to the homes.

“We will respect the police, and focus our  anger over repeated evictions and settlement demolitions on the Supreme Court,” Gisser said.

“A month ago, an entire settlement was wiped out becuae of the same claims and the same blindness, because of the same ruling by the same Supreme Court. Because of the same politicians that couldn’t manage to pass legislation that would legalize places like these,” said Chananel Kfir, a resident of one of the homes slated for destruction.