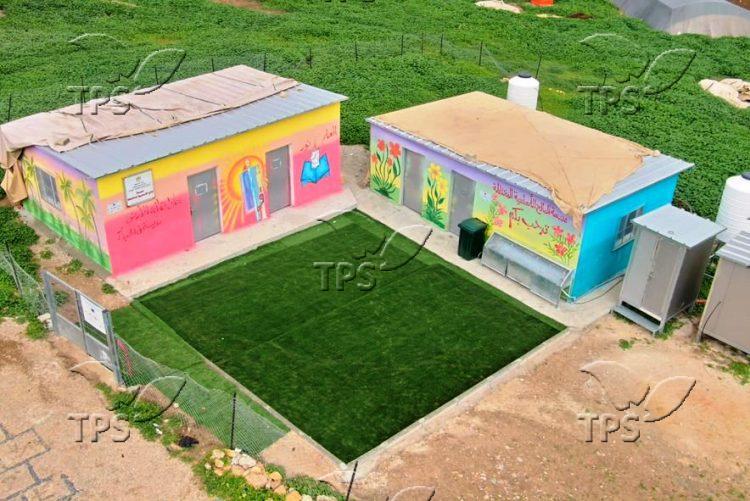 Jerusalem, 17 August, 2021 (TPS) -- In 2009, then-prime minister of the Palestinian Authority (PA) Salaam Fayyad laid out the Plan for the Creation of the State of Palestine, a methodical program for seizing control of territory in Area C to form a broad and viable basis for a Palestinian state, specifically in the areas under Israeli control.

In the 12 years since, the PA has built 100 new and illegal schools in Area C, much of them established with international funding, a new report by the Regavim Movement shows.

The data in the report, published Tuesday, shows that about 30 schools were built on state land and land with unclear ownership, seven were built inside zones used by the IDF for training, four in nature reserves, six on archeological sites, and three on private land.

19 of the buildings were built in Area B, under PA civil control and joint Israeli-PA security control, but were extended without a permit to adjacent land into Area C, under full Israeli control.

Furthermore, despite attempts to portray the construction of schools as a “humanitarian solution” due to the long distance from the place of residence to the educational institution, Regavim’s examination shows that all the new schools were established only a few hundred meters to 3,000 meters away from existing schools.

Eitan Melet, Regavim’s Field Coordinator for Judea and Samaria, has explained that the PA “is playing hide and seek with the Civil Administration. The PA builds ‘Confrontation Schools’ – illegal schools in Area C – for the purpose of anchoring a network of outposts in Area C.”

Regavim, which is at the forefront of combating the PA’s illegal construction, has been warning for about a decade of the organized PA takeover of open spaces in Judea and Samaria and that the school construction strategy is a key component of this plan.

Meir Deutsch, CEO of the Regavim, accused the State of Israel of lending a hand to the PA’s ploy, and allowing the Palestinian Authority to “act on the ground as it sees fit.”

Israel “does not enforce the law, and knowingly approves of construction plans that Israel knows are a Palestinian strategic tool,” he said.