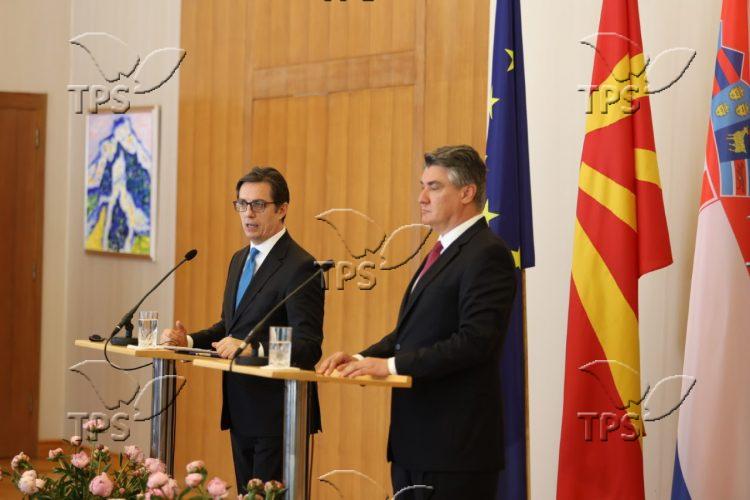 Pendarovski – Milanović: Croatia Is One of Greatest Supporters of North Macedonia’s EU Integration

“Croatia is one of the greatest supporters of the Republic of North Macedonia’s European integration.

“The Croatian support is a result of its unwavering belief in the pillars of the EU and its basic principles, which some, unfortunately, have brought into question lately.

“We’re grateful to Croatia for its sincere support, as well as for its responsibility for a peaceful and prosperous Balkans,” President Stevo Pendarovski said.

“For us, there is no other sustainable alternative to full membership in the European Union,” he reiterated, adding that to achieve this the country needs international support.

Every country makes efforts to provide security, safety, and prosperity to its citizens. Without cooperation between countries, however, this would be impossible, North Macedonia’s President said.

Highlighting that there are no open bilateral issues between Croatia and North Macedonia, President Milanović said the meeting focused on the country’s European path.

“It won’t be simple. It will take a lot of effort, friendly help, a lot of discussion, persuasion. Croatia knows how much perseverance and tedious, hard work it takes to achieve these goals. The same awaits North Macedonia on that path. We will do our best to prevent digressions,” Milanović said.

At their meeting as part of President Pendarovski’s visit to Croatia on Wednesday and Thursday, the two heads of state also discussed opportunities for bilateral cooperation.

“Let’s develop economic cooperation and trade as well as cooperation in other areas of mutual interest, such as tourism and infrastructure,” said Pendarovski, who is accompanied in Zagreb by representatives of North Macedonia’s business community.

Pendarovski confirmed that since the restrictions were lifted, seasonal workers had no problems entering Croatia. They were some of the first ones to get vaccinated in order to return to work in Croatia, he added.

The rights of minorities in both countries are at a high level, they concluded, expressing full readiness on both sides for their further promotion.

Cultural exchange was also a topic of the meeting, and it was concluded that the new Cultural Information Center of North Macedonia in Croatia would further boost cultural ties.

Earlier in the day, North Macedonia’s President was welcomed by his Croatian counterpart with full state and military honors.

Next, he is meeting with Croatian Prime Minister Andrej Plenković and Croatian Parliament Speaker Gordan Jandroković.