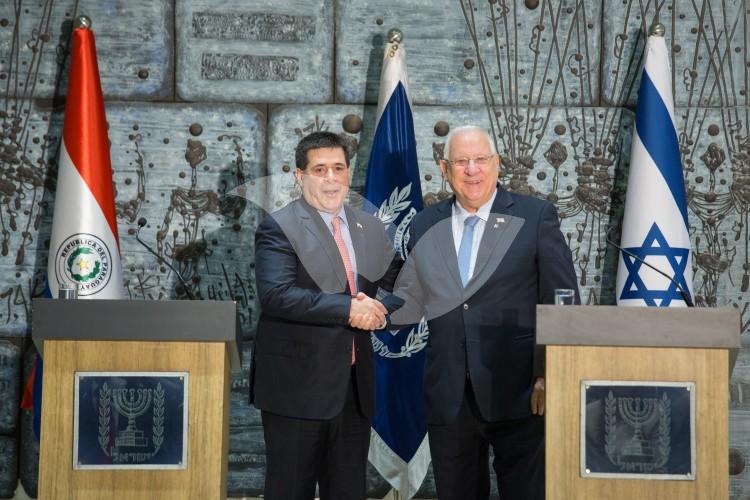 Jerusalem, 18 July, 2016 (TPS) -- Jerusalem (TPS) – President Reuven Rivlin and Paraguayan President Horacio Cartes both acknowledged the long bilateral friendship between their countries since Israel’s founding in 1948 and committed to expanding ties with each other at the President’s Residence in Jerusalem on Monday morning.

“Paraguay was and still is a true friend of the State of Israel since its establishment and even beforehand when it voted for it  on November 29, 1947,” said President Rivlin.

The United Nations held a vote on the Partition Plan on November 29, 1947, which proposed to divide the British Mandate of Palestine into separate Jewish and Arab states. Paraguay was one of 33 UN member states to vote in favor of the plan.

“We are happy to strengthen the ties between the two countries and I hope that your visit here will further improve the good relations,” Rivlin told his Paraguayan counterpart.

One of the manifestations of such an improvement was the reopening in 2015 of the Israeli embassy in Paraguay, which had ceased operations in 2002 due to financial constraints. Israel’s Ministry of Foreign Affairs often closes embassies and consulates on the basis of budgetary decisions over the allocation of available financial resources.

In light of Israel’s announcement earlier this year that it would close several of its consulates around the world including those in Philadelphia, Belarus, El Salvador, and Marseilles, the reopening of the embassy in Paraguay demonstrated that Israel has prioritized the advancement of relations with Paraguay and with much of Latin America.

“The reopening of our embassy in Paraguay was an important milestone for the rest of Israel’s activities in Latin America in general and with MERCOSUR specifically,” explained Rivlin.

MERCOSUR is a unified common market in Latin America that includes Paraguay, Argentina, Brazil, Uruguay, Bolivia, and Venezuela. Israel was the first country to sign a free trade agreement with the trading bloc on December 18, 2007. An environment allowing for the expansion of the exchange of goods and services between Israel and MERCOSUR has enabled Israel and Paraguay to conduct a number of joint initiatives together.

“We have been able to expand our relationship in a variety of areas: the economy, science, technology, business, and security,” noted Rivlin.

President Cartes acknowledged the value of partnering with Israel in such areas. “Israel stands out in its capabilities in agriculture, science, and technology,” said Cartes.

“We are interested in being involved in the exchange of knowledge and technology, which will contribute to the development of our country and its young population,” he continued. “This is an exciting and historic time for all of us and we are very excited and pleased to visit Israel, a friend of Paraguay.”