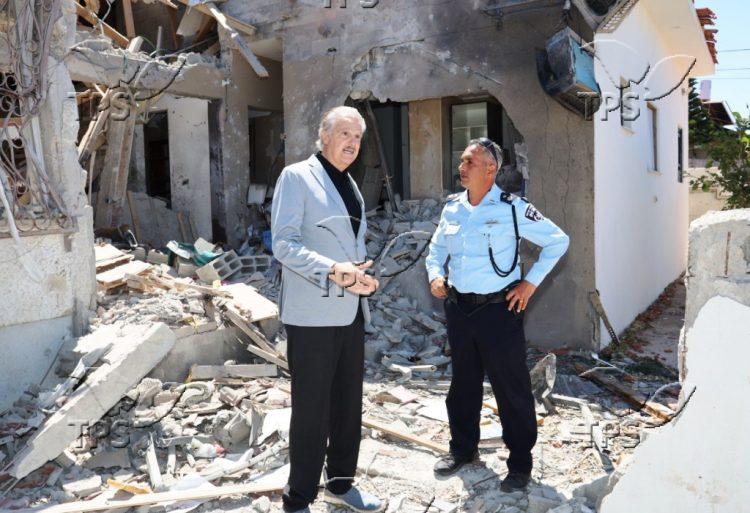 Jerusalem, 19 May, 2021 (TPS) -- The Pro-Israel Jerusalem Prayer Team page, with some 78 million followers, was pulled by Facebook after radical Islamists flooded it with anti-Semitic hate speech.

The popular page is led by Dr. Mike Evans, who is now in Israel with a delegation of pro-Israel Christian supporters to demonstrate their solidarity with Israel.

On Tuesday, Evans and his team toured Jerusalem and then proceeded to Ashkelon and Sderot, both of which have been shelled throughout the past week by Hamas rocket fire and suffered heavy damage.

Early in the morning, the delegation met with a number of families who were evacuated from their homes in Israel’s south and took refuge in new apartments recently added to the Holocaust Survivor Guest House, a NIS 10 million project initiated by Evans that includes seven apartments accessible to Survivors, with facilities resembling those of a five-star hotel.

One of the families they met and spoke to was the Senders family. Danny Sender, 12, who was evacuated from his home along with his parents and three siblings after their apartment building was hit by a rocket, shared that “it was terrifying hearing the sirens all the time. We could be anywhere, but we’d have to drop everything and just run.

Of the rocket impact to his building, he remembers that it “was a blur. I barely remember grabbing Ofer’s hand. He was playing with his train set and didn’t want to let go. But I just yanked him and pulled him inside. Mom slammed the door behind us, and seconds later, we heard the loudest noise I ever imagined. I can still hear it. The building shook like it was going to fall; we were all screaming. And then, it was eerily quiet for a minute.”

“It’s tough. It’s really, really tough,” Danny’s mom Adi said. “Our apartment was damaged, and the kids are traumatized—but thank God, we’re all alive and well and safe here. The opportunity to stay in these apartments after all we endured was a lifesaver. It’s so comforting to know that there are people out there—not just in Israel, but also around the world—who care and want to help.”

In Ashkelon, the delegation met with police officers who patrolled with them around the city.  The visit continued with a tour of the city of Sderot and a meeting with residents in the shelters who were deeply moved by the show of American support.

In the course of the visit, Evans offered his encouragement to Israeli citizens and expressed his disappointment and anger over the skewed media presentation of the state of affairs in Israel.

“The media portrays Israel to look like the aggressor and Hamas like the victim, when the opposite is true,” he said. “It’s a media war and a physical war.”

Evans’ Facebook page had been hosting a daily global prayer event for the peace of Jerusalem. Last Thursday he had one million engagements and 43 million impressions along with a huge number of people posting anti-Israel statements and anti-Semitic pictures and attacking the site, which caused Facebook to close the page.

He blamed Iran for the conflagration, using the Hamas terrorist group as a proxy to fight its war against Israel and the West.

“The media throughout the world is buying into the lie, publishing stories that equate Hamas and Israel with moral equivalency, claiming that Hamas is the victim, beaten up by Israeli storm troopers, but it’s a lie,” he underscored.

Evans said that he is planning a Facebook event that will connect world leaders with 78 million followers in the Jerusalem Prayer Team, “but it’s difficult because these devils are trying to win many wars—media war, social network war and a physical war—all with lies.”