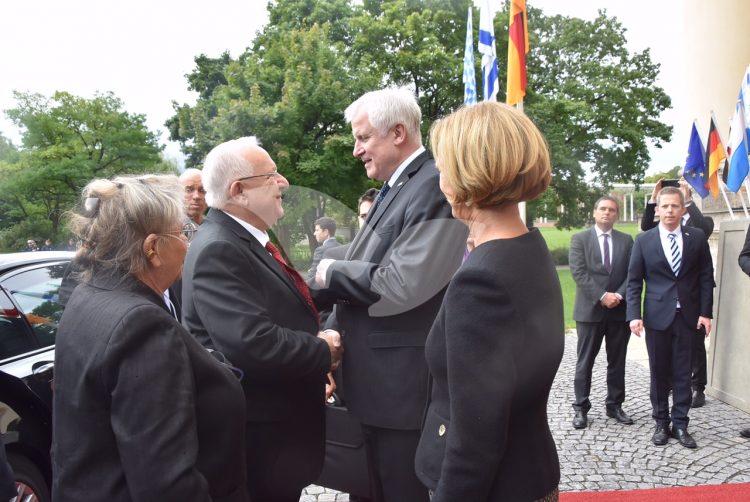 Photo by Amos Ben-Gershom/GPO on 6 September, 2017

Jerusalem, 6 September, 2017 (TPS) -- President Reuven (Ruby) Rivlin began a state visit to Germany Wednesday, meeting with Minister-President of Bavaria Horst Seehofer in Munich before inaugurating a Memorial Center in memory of 11 Israeli athletes who were murdered by Palestinian terrorists during the 1972 Munich Olympics.

At a ceremony including senior German politicians and bereaved family members at the site of the 1972 Olympic Village, Rivlin said the gathering was being held “45 years too late, [in order to] close a circle that will never be closed” and called on the international community to memorialize the fallen athletes by fighting terrorism.

“There are still those who see in the murder of sportsmen, a heroic deed,” Rivlin said. “Just last year Fatah marked the massacre of the sportsmen as an ‘act of heroism.’

“The center we are inaugurating today must be a message to the whole world: There can be no apologizing for terrorism. Terror must be unequivocally condemned, everywhere. In Barcelona, in London, in Paris, in Berlin, in Jerusalem, and everywhere else. We – the international community – must stand united in the struggle against terror, dedicated to fight it and defeat it,” he added, noting also that terrorists’ employ a wide range of constantly changing tactics.

In the early morning of September 5, 1972, a group of Palestine Liberation Organization terrorists funded by current Palestinian Authority President Mahmoud Abbas infiltrated the Israeli dormitory, holding members of the delegation hostage while demanding the release of hundreds of terrorists from jails in Israel. A rescue attempt coordinated by German officials failed, and the athletes were brutally murdered, some during the hostage ordeal and others during the botched rescue operation.

Prime Minister Golda Meir noted at the time that “Just 27 years after the end of World War II, Jews have once again been slaughtered while bound and gagged, and all on German soil.”

Ankie Spitzer, the widow of fencing coach Andre Spitzer, told local radio ahead of the ceremony that after nearly a half-century of waiting, the new center would finally help her gain closure.

“It took 45 years, but I don’t regret the long and lonely journey that brought us to this day. This is what I wanted,” Spitzer said.

Later Wednesday, Rivlin will meet with families of the massacre victims before visiting the site of the Dachau concentration camp. Thursday, the president will travel to Berlin for talks with Chancellor Angela Merkel.