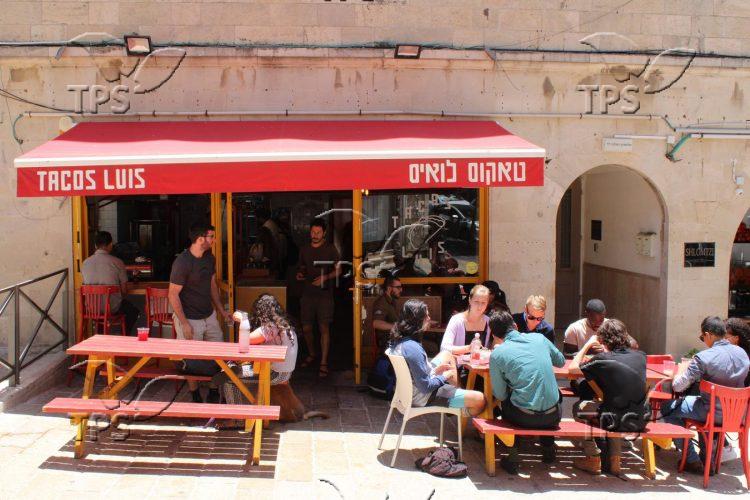 Jerusalem, 30 June, 2021 (TPS) -- Lea Stoffer, Israeli native, met Luis Cruz, the love of her life, 20 years ago in Oaxaca, Mexico, on a trip after she was discharged from the Israeli army.

Stoffer stayed with Cruz’s family in Mexico for five years and learned Spanish. She then moved to New York to join her sister Yettie Stoffer where they both learned culinary management.

Many years later, Cruz found Stoffer through Facebook while she was working at a bakery in New York. After completing his gastronomy (culinary) studies in Mexico, he joined Stoffer in New York and went through a two-year process of converting to Judaism.

They were married and decided to move to Israel, and Cruz made Aliyah in 2015. Stoffer wanted to be closer to her family, and the two set a goal of opening an authentic Mexican restaurant.

Tacos Luis opened in July 2018 on Queen Shlomziyon Street in Jerusalem and is the only authentic Mexican restaurant in the city.

It took many months for Cruz, Lea Stoffer and Yettie Stoffer to open the restaurant and perfect the quality of the taco. They launched a crowdfunding project to fulfill the dream of opening the restaurant. It has since become a household name throughout the city, serving fresh, delicious and cheap food.

Cruz explained in a video on Facebook that taquerias, Mexican restaurants specializing especially in tacos and burritos, like Tacos Luis, are very popular in Mexico and are located on every corner and street.

Lea Stoffer said the best part of Tacos Luis is being able to work with her sister and husband and getting amazing reviews from customers that return several times a week.

“It’s very hard to run a restaurant and it’s very hard to get to the quality of tacos that we make so far away from Mexico,” she told TPS. “It’s not an easy thing at all and we came a long way to get to where we are now.”

Stoffer said their ingredients are all local including the corn the tortillas are made from, which is grown locally in Israel. She said it’s essential for them to support the local economy and growers, and for the restaurant to be as authentic as possible with local ingredients.

Stoffer said they make their corn tortillas through a grinder imported from Mexico since they were not able to find one in Israel.

Gabriel Jacobson, a customer, said he would highly recommend this restaurant to everyone.

“Tacos Luis is a fantastic restaurant, serving great Mexican food and I always have an amazing experience every time I come here,” he said.

Lázaro Benavides, a student at the Hebrew University of Jerusalem and a native of Mexico City, said the traditional Mexican food and drinks is what he loves most about the place.

He said this Taco Luis is unique in Jerusalem and the Middle East since most other Mexican restaurants in this part of the world “don’t really have the real Mexican food.”

Benavides said those restaurants have an inaccurate interpretation of what Mexican food is.

“As a Mexican and person who really likes tacos, I can say that Tacos Luis is a place where they have really made an effort to serve food that you could also have in the street in Mexico,” he said.

Stoffer said Tacos Luis is accessible for everyone since it’s not expensive and people don’t have to think twice about their budget when they come here.

Benavides said that Cruz is “nice, open and funny.” He said that Lea and Luis are “special since they moved from Oaxaca,” and thinks “there’s not that many people from there that end up in Israel.”

Oaxaca is a Mexican state famous for its diversity in language, nature and foods. They are also rich in different culinary traditions, ingredients and flavors.

Benavides said they have worked very hard to build this restaurant and it’s unique.

“I think we can learn from them that you can always take a piece of your country and piece of your culture, and share it with others and try to make it nice to them, not just change it for them to like it, but give it as it is,” he said. “People are going to appreciate it more because it’s more unique.”