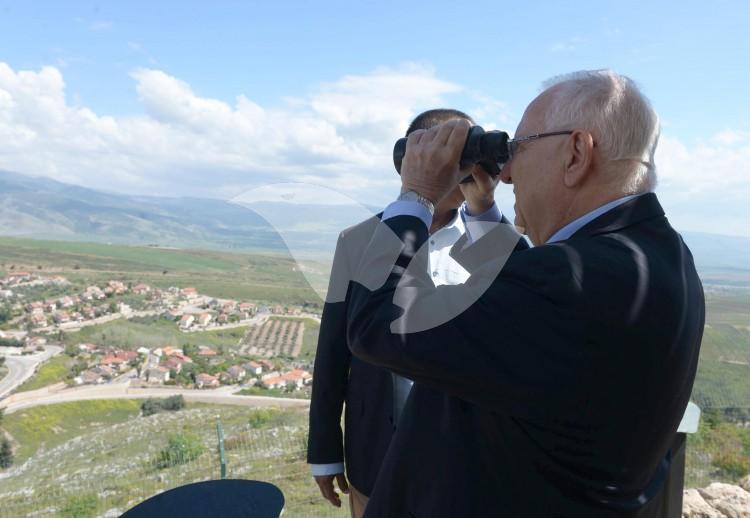 Jerusalem, 22 March, 2016 (TPS) -- President Reuven Rivlin addressed the threat of the Lebanese Hezbollah terrorist group, which is armed and financed by Iran, during a tour of Israel’s Upper Galilee Monday, March 21.

“The words of the verse, “From the north, north, evil will open forth,’ are apparent and palpable here more than ever,” said Rivlin, quoting the Book of Jeremiah, Chapter 1, which foretells of the destruction coming to the land of Israel from the Babylonian Empire.

The president made his remarks while visiting the memorial to Joseph Trumpeldor, a Russian-Jewish immigrant to Israel in the early twentieth century. Trumpeldor died 96 years ago in a battle fought between the Jewish residents in the Upper Galilee town of Tel Hai and Shiites from Lebanon who arrived at the town supposedly searching for French soldiers. The nearby town of Kiryat Shmona was named after Trumpeldor and the other seven Jews who died in the battle (“shmona” means “eight” in Hebrew).

“Here on the northern border of our country, at a memorial to those heroes, we cannot forget that this year we are marking a decade since the (second) war in Lebanon,” stressed Rivlin.

“Ten years ago, the residents of the north and all the citizens of Israel demonstrated the exemplary strength of Israeli society.”

Rivlin asserted that Hezbollah remains a national security threat on Israel’s border despite being embroiled in the Syrian civil war.

“Hezbollah is a brutal terrorist organization that has threatened in the past, and currently threatens, all the citizens of Israel, Jews and Arabs alike,” said Rivlin.

The president also referred to the significant geopolitical development in which the Gulf Cooperation Council (GCC) and Arab League officially recognized Hezbollah as a terrorist organization earlier this month.

“Hezbollah today is considered a terrorist organization by the Arab countries in the Middle East who know and very well recognize the innocent blood that dirties the hands of the organization and its leaders,” noted Rivlin.

“Anyone who says otherwise, regardless of the reason, contradicts truth and morality and does injustice to his electorate, supporters and all the citizens of Israel,” Rivlin added.

A couple of weeks ago, Hadash and Balad, two of the four factions in the Knesset’s Joint List Arab faction, condemned the decision of the GCC and the Arab League to blacklist Hezbollah as a terrorist organization.

President Rivlin also said that Hezbollah’s fight against ISIS is in no way mutually exclusive with its identification as a terrorist organization.