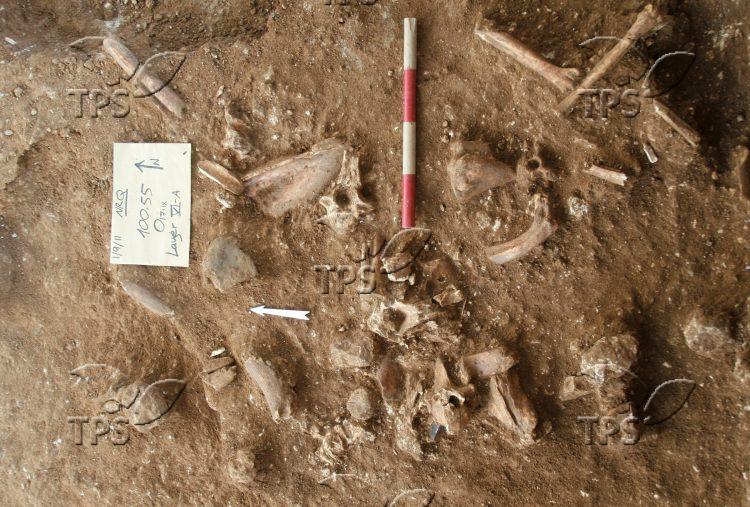 Jerusalem, 27 June, 2021 (TPS) -- The bones of an early human, unknown until now to science, who lived in the Levant at least until 130,000 years ago, were discovered in excavations at the Nesher Ramla site, near the city of Ramla in the center of Israel.

According to common practice, the new Homo fossil was named after the site where it was discovered – the Nesher Ramla Homo type.

Recognizing similarity to other archaic Homo specimens from 400,000 years ago, found in Israel and Eurasia, the researchers reached the conclusion that the Nesher Ramla fossils represent a unique Middle Pleistocene population, now identified for the first time.

The discovery of a new Homo group in this region, which resembles Pre-Neanderthal populations in Europe, challenges the prevailing hypothesis that Neanderthals originated from Europe, suggesting that at least some of the Neanderthals’ ancestors actually came from the Levant.

The Israeli researchers assert that at least some of the later Homo fossils found previously in Israel, like those unearthed in the Skhul and Qafzeh caves, do not belong to archaic Homo sapiens, but rather to groups of mixed Homo sapiens and Nesher Ramla lineage.

According to researchers from Tel Aviv University and the Hebrew University of Jerusalem, the morphology of the Nesher Ramla humans shares features with both Neanderthals, especially the teeth and jaws, and archaic Homo, specifically the skull. At the same time, this type of Homo is very unlike modern humans – displaying a completely different skull structure, no chin, and very large teeth.

Following the study’s findings, researchers believe that the Nesher Ramla Homo type is the ‘source’ population from which most humans of the Middle Pleistocene developed. In addition, they suggest that this group is the so-called “missing” population that mated with Homo sapiens who arrived in the region around 200,000 years ago – about whom we know from a recent study on fossils found in the Misliya cave.

Professor Israel Hershkovitz of Tel Aviv University said that “the discovery of a new type of Homo” is of great scientific importance. It enables us to make new sense of previously found human fossils, add another piece to the puzzle of human evolution, and understand the migrations of humans in the old world.”

“Even though they lived so long ago, in the late middle Pleistocene 474,000-130,000 years ago, the Nesher Ramla people can tell us a fascinating tale, revealing a great deal about their descendants’ evolution and way of life,” he said.

The important human fossil was found by Dr. Yossi Zaidner from the Institute of Archaeology at the Hebrew University of Jerusalem during salvage excavations at the Nesher Ramla prehistoric site, in the mining area of the Nesher cement plant.

Digging down about 8 meters, the excavators found large quantities of animal bones, including horses, fallow deer and aurochs, as well as stone tools and human bones.

An international team led by the researchers from Tel Aviv and Jerusalem identified the morphology of the bones as belonging to a new type of Homo, previously unknown to science. This is the first type of Homo to be defined in Israel.

The findings also imply that the famous Neanderthals of Western Europe are only the remnants of a much larger population that lived here in the Levant – and not the other way around.”

Prof. Gerhard Weber, an associate from Vienna University, said that the story of Neanderthal evolution will be told differently after this discovery.

“Europe was not the exclusive refugium of Neanderthals from where they occasionally diffused into West Asia. We think that there was much more lateral exchange in Eurasia, and that the Levant is geographically a crucial starting point, or at a least bridgehead, for this process,” he explained.