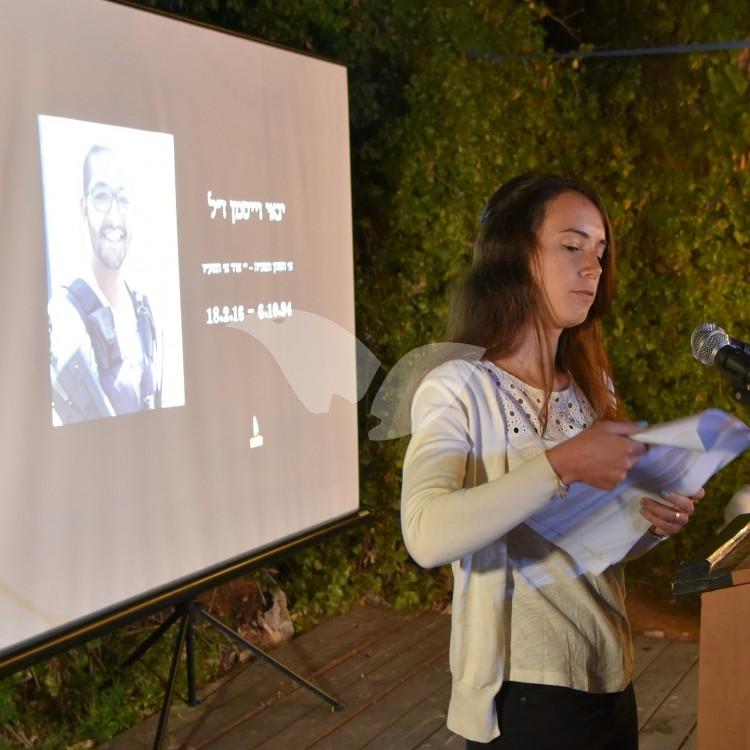 Young Widow: “I Thought After a Year I Would Know How to Cope”

Jerusalem, 1 May, 2017 (TPS) -- As Israelis mourned the 27,672 fallen soldiers and victims of terror on Memorial Day on Monday, hundreds of bereaved family members took part in a personal memorial ceremony on Sunday night. Organized by the national organization supporting terror victims and their families, OneFamily, the ceremony consisted entirely of brief speeches of closest relatives of terror victims and fallen soldiers.

The host of the ceremony was Yael Weissman, the young widow of IDF Staff Sergeant Tuvia Yanai Weissman, 21, who was murdered while trying to stop two terrorists from stabbing shoppers at a Rami Levy supermarket in Sha’ar Binyamin outside of Jerusalem in February 2016. He was shopping with his wife and their four-month old baby daughter Netta, at the time of the attack.

“I thought that after a year, I would know how to cope with each situation. And now I’m here, after a year. Standing in front of you but I am broken inside…” Yael said.

“I don’t want to know of the pain each year that I will face or what will happen to me every day throughout the year, or how difficult it will be during vacations and holidays, or on our anniversaries or birthdays,” said Weissman. “We do not want to think about Memorial Day – a day when all eyes are on us, those bereaved families who have lost their loved ones, when the public wants to share with us the pain that during the year is only ours, but today is everyone’s.”

“I just want to escape to you Yanai and be with you alone. But today everyone is there with you. So let me ask for a wish. Make the day come when I will not feel pain in my every breath. Make the day come when I can look in the mirror and say I’m all right, that you’re all right. That I am doing right, choosing the right things, living right. That my way is your way too, even though you’re not here. Send me a sign, a signal or an angel to direct and guide me,” asked Weissman.

Staff Sgt. Tuvia Weissman, who served in the Nahal Brigade, was awarded a posthumous medal of bravery in September 2016 for his courage in confronting the terrorists, as he was off duty without a weapon at the time of the attack. He was killed by two 14-year-old Palestinians from near Ramallah, who also wounded another Israeli shopper.

Major General Roni Numa, who presented the award to Yael, during an army ceremony held at Jerusalem’s Ammunition Hill in September 2016, said that Weissman wasted no time and ran towards the place where the shouts were coming from. “Once he realized what was happening, Sgt. Weissman didn’t hesitate and charged barehanded at the two terrorists, fought with them, and tried to arrest them.”

Since the creation of the State of Israel, 3,117 people have been murdered in terrorist attacks.

Other speakers at the OneFamily ceremony included Ophir Shaar, the father of Gil-Ad Shaar, who was kidnapped along with his two friends at the Gush Etzion junction and murdered by Hamas terrorists in 2014; Ido Yaori, brother of Staff Sergeant Amit Yaori, a combat soldier who was killed during Operation Protective Edge; Liel Rubel, the brother of Sergeant Benaya Rubel, a paratrooper who was killed during Operation Protective Edge; Tzachi Krigman, the father of Shlomit Krigman, who was murdered in the Beit Horon terror attack in 2016; Malka Kalangel, mother of Major Yochai Kalangel, who was killed on the northern border in 2015; and Reut Yahalomi, Corporal Netanel Yahalomi, who was killed on the Egyptian border in 2012.

“On this day, the people of Israel are trying, even for a few moments, to stand by you and share with you the heavy burden you carry every day. This is the day when all of us: children, boys, grown-ups are united into one entity and united as one body,” said the CEO of OneFamily, Chantal Belzberg to the bereaved families.