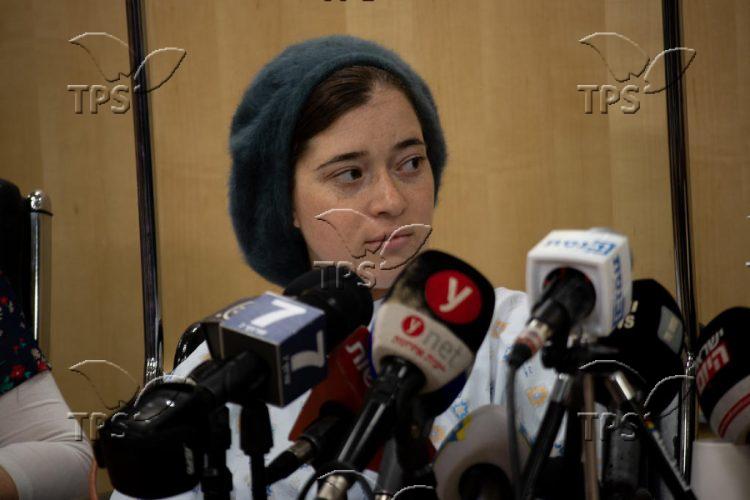 Jerusalem, 10 August, 2021 (TPS) -- In December 2018, about two and a half years ago, Shira Ish-Ran, was seriously injured when terrorists fired at a bus stop at the Ofra Junction. She arrived at Shaare Zedek Hospital in Jerusalem in critical condition and was 30 weeks pregnant.

Another six people were injured in the shooting, including her husband Amichai Ish-Ran, who sustained injuries to his legs.

The baby was delivered in an emergency procedure, underwent CPR, and was hospitalized in the intensive care unit. Due to the severe injury, the baby died after three days. He was named Amiad Yisrael and was buried while his mother was still hospitalized. He was Israel’s youngest terror victim.

Shira survived despite the severe injuries she incurred and was released from the hospital in good condition after about a month.

Two and a half years later, the same team that saved Shira’s life at Shaare Zedek and accompanied her, is the one who accompanied her in the moving birth on Monday.

The exciting birth took place in the morning with a cesarean section and a baby boy weighing 2.855. Kg was born.

Shaare Zedek CEO Prof. Ofer Marin stated that “the entire Shaare Zedek family is happy and excited together with Shira and Amichai.

We were with them in the difficult moments over two years ago and we are so happy to accompany them in this happy moment. We wish them great happiness and joy and peace.”

Haim Silberstein, Shira’s father, thanked God for “the great kindness he did to our family.”

“After the heinous attack and the murder of Amiad Yisrael, it is a kind of a closing of a circle that Shira and Amichai had a cute baby boy today. It is a chilling realization of words Shira said as she held Amiad Yisrael at the time of his death and said ‘we will show them, we will bring more children into the world, Am Yisrael Chai [the people of Israel are alive],’” he said.

“Our children are heroes and we appreciate and love them beyond measure,” he added.