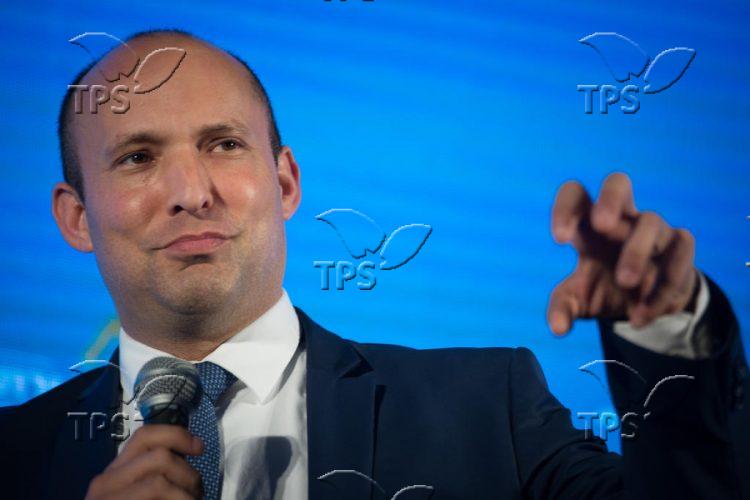 Bennett From the Right Says He Will Head Left-Wing Govt.

Jerusalem, 31 May, 2021 (TPS) -- Member of Knesset (MK) Naftali Bennett, head of the Yamina (to the Right) party, announced Sunday night that he will head a minority government comprised of several small left-wing parties and will oust Prime Minister Benjamin Netanyahu.

Bennett, who heads a party of only six MKs, announced he was joining Yesh Atid head Yair Lapid and a left-wing government that will have to rely on the votes of Arab MKs, some of them from the anti-Zionist Islamist party.

“For two and a half years the State of Israel has been in a spin. The political crisis in Israel is unprecedented at a global level. The madness can be stopped,” he asserted while claiming that he had exhausted all attempts to establish a right-wing government with Netanyahu.

Bennett’s coalition members will include the extreme left-wing Meretz party, the anti-religious Yisrael Beitenu party, and the left-wing Labor party.

After some 20 years in the political desert, Bennett, a right-winger, will be responsible for bringing the extreme left back to power.

Bennett will not have a coalition of 61 members, and even one vote will be sufficient to topple his government.

Bennett claims, possibly naively, that the government he heads will focus only on crucial issues and will refrain from addressing ideological contentious issues which are in dispute among his coalition members.

Bennett has seven seats in the Knesset, but one of the members of his party, Amichai Chikli, announced he will vote against such a coalition while accusing Bennett of violating most of his promises to his electorate.

Despite Bennett’s explicit promises, “Lapid will be prime minister and although most of Yamina’s voters are right-wingers, the government that will be formed is a center-left government plus a few fig leaves from the right. Yamina has violated most of its promises to its electorate while blatantly violating the most basic democratic code of telling the truth to the voter and making a sincere effort to meet its obligations to it,” Chikli charged on Monday.

Lapid has until Wednesday to notify President Reuven Rivlin that he has formed a government. Several crucial issues still remain in dispute in the negotiations between the various potential coalition members. Most pundits believe these issues will be ironed out.

While Bennett would have liked to be remembered as the first religious-Zionist prime minister, his constituents will probably remember him as one of the worst political deceivers in Israel’s history.