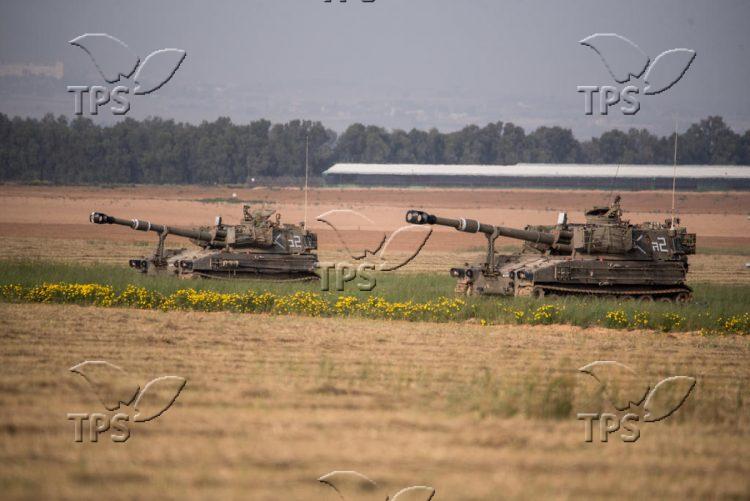 Jerusalem, 11 May, 2021 (TPS) -- The IDF has deployed artillery units to the Gaza border and ordered the mobilization of 5,000 reserve soldiers after rocket attacks from the Gaza Strip continued into Tuesday.

The forces being called up in an emergency procedure include infantry and artillery units as well as intelligence and air force personnel as part of  Operation Guardian of the Walls. Photos seen by TPS show artillery batteries and tanks close to the Gaza border. Large numbers of armored vehicles have been reported to be making their way to Israel’s south from the north.

The IDF will maintain strikes on Hamas and Palestinian Islamic Jihad targets in the Gaza Strip, an IDF spokesperson stated on Tuesday. After missile attacks had continued throughout the night, the IDF announced it had hit additional targets in Gaza.

Defense Minister Benny Gantz on Tuesday authorized the mobilization of the reserve units, the Ministry of Defense stated. The soldiers have been ordered to join Israel’s Southern Command, the Homefront Command, and the Operations Directorate within the IDF General Staff.

Eight Border Police reserve units have also been called to active duty and are to reinforce police units across the country following the latest violence and Muslim riots in several cities and towns, the Israeli police announced on Tuesday.

Meanwhile, the IDF’s “Chariots of Fire” military exercise has been suspended. Launched on Sunday, the month-long wargame was to simulate war on several fronts, and primarily against Hezbollah in the north, and was to include a scenario of the massive firing of missiles and rockets from all arenas on the home front.

It was scheduled to be the largest and most comprehensive IDF maneuver in its history and was to include regular and reserve forces from all commands, with the participation of combat forces in the air, at sea and on land, as well as the political echelon, the Ministry of Defense, the National Emergency Authority the Ministry of Foreign Affairs and other security bodies.

On Sunday, IDF Chief of Staff Aviv Kochavi had announced that the operation would not be canceled or postponed due to tensions in Jerusalem and the Gaza Strip but on Tuesday reversed his decision following the latest round of missile attacks.

The IDF has reported that it has eliminated some 30 terrorists since Hamas attacked Jerusalem on Monday evening and after the IDF announced the launch of Operation Guardian of the Walls.