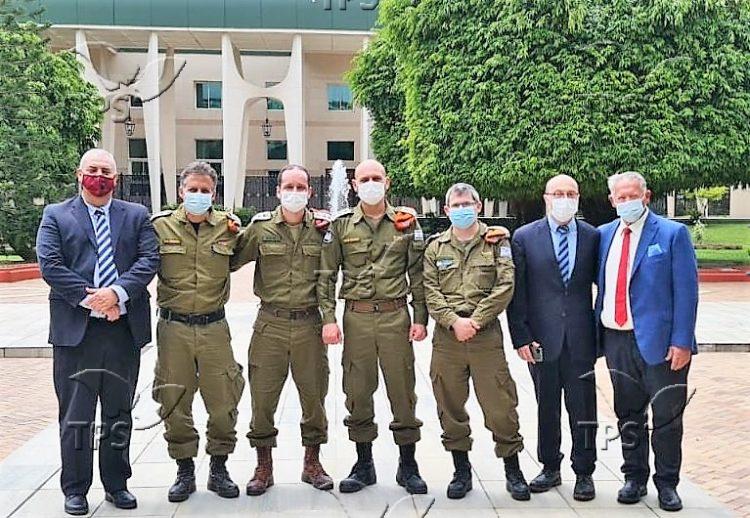 Jerusalem, 18 March, 2021 (TPS) -- The IDF humanitarian delegation operating in Equatorial Guinea is ending its mission after treating over 600 casualties and performing 84 life-saving operations.

The delegation was dispatched following a series of explosions in the city of Bata that led to hundreds of dead and injured and extensive damage.

Last Thursday, 67 regular and reserve IDF troops from the Medical Corps, Homefront Command, and Ministry of Health left to the Central African country at the request of its government and with the approval of the IDF Chief of Staff.

The delegation, under the command of the deputy chief medical officer, Col. Dr. Noam Fink, worked at local hospitals and performed emergency operations, operated in the affected areas to find casualties, and gave emergency training to the local population.

President Reuven Rivlin, who is on a three-day diplomatic mission to Europe with IDF Chief of Staff Lt.-Gen. Aviv Kochavi, spoke on Wednesday with Fink, who talked about the “excellent cooperation with the local health authorities and government, and of the warm welcome they received.”

“Despite the distance from home and the difficult sights, spirits are strong and we are focused on the mission of giving professional medical assistance at the highest level and saving lives,” he said.

Kochavi said that while the IDF is an army with a military mission, it “also heals and saves,” and that’s what the delegation is doing “in a far-off country. As ever, we do this very seriously, thoroughly and professionally. Remarks about your professionalism have reached us.”

“I am very proud of you. Thank you for everything. I salute you,” he said.

“You are lending a hand to the world as a whole at a time of need, and we are proud of you,” he added.