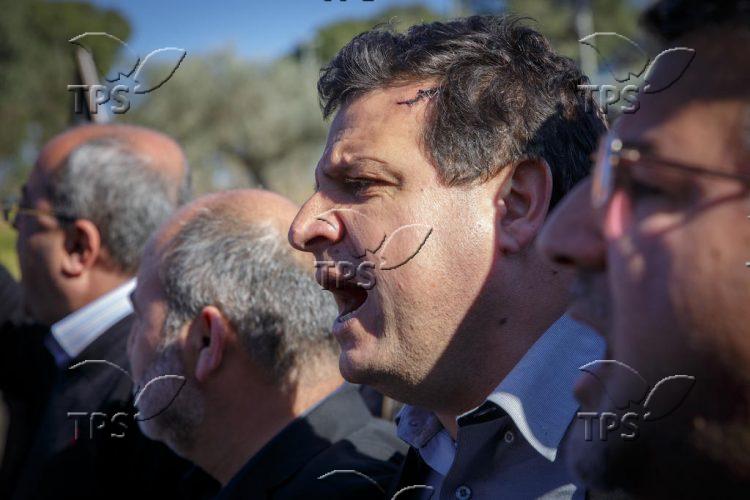 Jerusalem, 27 April, 2021 (TPS) -- Member of Knesset (MK) Ayman Odeh, head of the Arab-majority Joint List, published a post on Facebook in Arabic calling for an intifada, a violent uprising, and praising Arab rioters in Jerusalem.

Thousands of Muslims rioted at several locations in Jerusalem in the past nights, a continued expression of religious violence during the Muslim month of Ramadan that the capital has been experiencing in recent days.

Odeh lauded the violence as a “wonderful and honorable victory.”

“These clashes are sometimes calm and sometimes erupt, and it will be so until the intifada comes and brings an end to the occupation and hoists the Palestinian flag over the Al-Aqsa Mosque, over the churches, and over the liberated gates of Jerusalem. We extend our greetings to the free people of Jerusalem,” he concluded.

The Arab Desk of the Zionist watchdog Im Tirtzu, which first reported Odeh’s post, stated that in recent days it has been monitoring the posts of MKs from Arab parties and “nearly all voiced praise for the Arab rioters in Jerusalem.”

“This support of violence against Jews is further proof why it would be a disaster to establish a government reliant on outright anti-Zionist parties that support violence and oppose Israel’s existence as a Jewish and democratic state,” the Zionist group said,

Naftali Bennett and Gideon Saar, right-wing politicians, are reportedly in negotiations with the left-wing and Arabs parties to establish a government and replace Prime Minister Benjamin Netanyahu.

Im Tirtzu called on the leaders of the nationalist parties to “take personal responsibility and form a nationalist government.”

The B’Tsalmo rights organization demanded that Odeh be investigated for inciting murder and violating the Terrorism Law.

In a letter sent to Attorney General Avichai Mandelblit, B’Tsalmo wrote that “there is no doubt” that the acts of rioters in Jerusalem “are acts of terrorism.”

“Moreover, this is a clear incitement to violence and terrorism,” the letter said.

“Therefore, calling for a third intifada undoubtedly means a violent intifada saturated with attempted murders, which constitutes incitement to violence and encouragement of terrorist acts,” the letter noted.

Shai Glick, CEO of B’Tsalmo, said that if a right-wing person would have encouraged such acts he would have been arrested, but “Odeh is immune as the other Arab Knesset members.”

“They are allowed to support terrorists, to visit terrorists, and express sympathy with terrorists and are immune from prosecution. This selective enforcement must end,” he demanded.