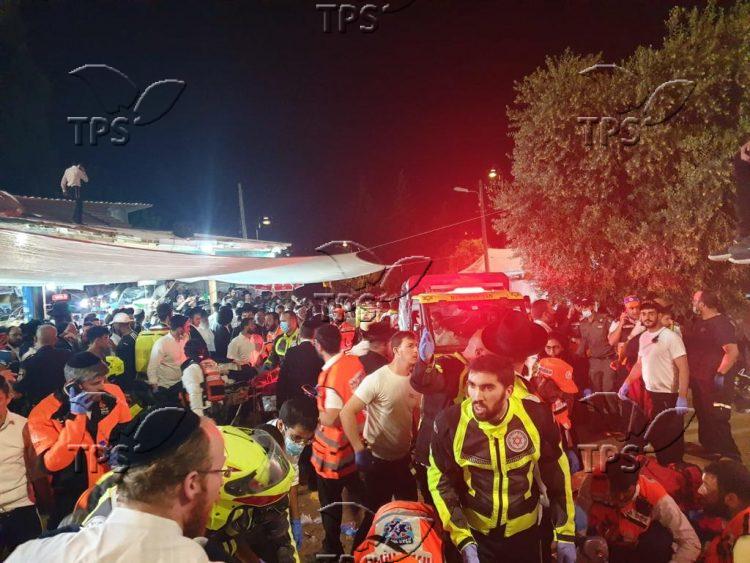 Jerusalem, 30 April, 2021 (TPS) -- Israel is in shock and dismay following the death of 44 and the injuring of some 150 people during Lag BaOmer festivities at Mount Meron on Thursday, one of the worst disasters in the country’s history.

Hundreds of thousands of Jewish worshipers arrived at the gravesite of Rabbi Shimon bar Yochai to celebrate Lag BaOmer and participate in the traditional bonfire lighting.

At about 1 am, the throngs bottlenecked at one of the entrances to one of the celebration complexes and hundreds of people were crushed, many suffocating under the mass and the intense heat.

The police, MDA, ZAKA, United Hatzalah and IDF forces worked through the night to evacuate the wounded and tend to the dead.

United Hatzalah volunteer EMT Yehuda Gottleib, who was one of the first responders at the scene of the mass casualty incident in Meron, recalled that “when I saw dozens of people fall on top of one another during the collapse. A large number of them were crushed and lost consciousness. I immediately requested backup from the on-site dispatchers and told them to send as many additional volunteers and medical personnel as they could to the scene and that we had dozens of injuries.”

Vice President of the Volunteer Department of United Hatzalah Lazar Hyman who was at the scene said that “this is one of the worst tragedies that I have ever experienced. I have not seen anything like this since I entered into the field of emergency medicine back in 2000.”

CEO of United Hatzalah Eli Pollack, who ran the on-site dispatch center during the incident said that “this is a very tragic and unusual incident that sadly cost many people their lives. Dozens of our volunteers performed CPR on the victims who were crushed, while others treated more than 100 people who were injured with varying degrees of severity. Our ambulance teams transported the injured to Ziv Hospital in Tzefat, Rambam Hospital in Haifa, and the Galilee Medical Center in Nahariya.”

Others were evacuated by MDA and IDF helicopters to hospitals in the center of the country.

It is unclear what caused the terrible disaster, but witnesses claim that a police checkpoint that attempted to slow the flow of worshippers toward one of the complexes may have caused the pressure in the crowd that led to the stampede.

Commander of the police’s northern district Shimon Lavie took responsibility for the incident, and Internal Affairs announced that it has launched an investigation, alongside the police’s own probe into the incident.

Prime Minister Benjamin Netanyahu arrived at Mont Meron on Friday morning to be briefed on site about the catastrophe.

“A terrible disaster on Mount Meron. We all pray for the healing of the injured. I want to strengthen the rescue forces operating in the area,” he tweeted.

The country is now preparing for dozens of funerals and towns and cities across the country which will take place on Friday, Saturday night and Sunday.