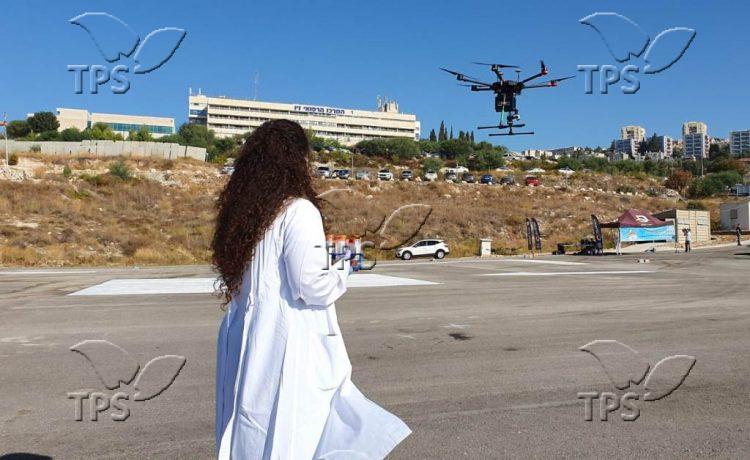 Israeli Hospital Deploys Drones to Save Time, Save Lives

Jerusalem, 18 October, 2020 (TPS) -- Ziv Medical Center in Tzfat will become the first hospital in Israel to use drones to transport medical equipment, drugs, and blood and Corona tests, from the hospital and to it.

During the first stage, the drones will fly up to 10 km and carry a weight of about 5 kg while using GPS that will guide them to their exact location.

As part of the pilot that was launched this week, in the first 10 days, more than 100 sorties will be made to various destinations, including to the second wing of Ziv Medical Center which is located in downtown Tzfat.

The use of drones will save time and will bypass road blockages in the event of snow or a war.

Air transport will also provide a solution for the IDF, especially in times of war.

A second phase of the project will include the transfer of medications from Ashdod to Ziv Medical Center, a flight path of 150 km. Instead of about three and a half hours on the road, the drones will make the trip in an hour and a half and will not be slowed down by traffic jams.

The hospital underscored that the dugs in question coming out of Ashdod are often life-saving drugs and therefore every minute is important.

In addition, the drones that will enter the operation in the second phase will receive blood packages from MDA Haifa, situated 60 km and about half an hour flight away, and from Tel Hashomer in Tel Aviv, a 130 km flight that will last about 70 minutes.

Director of Ziv Medical Center, Prof. Salman Zarqa, said that “the use of aircraft allows Ziv Medical Center a fast and efficient supply of equipment, especially in emergencies when the roads are congested with regular vehicles or with tanks and heavy military vehicles on their way to the northern borders.”

“Using the aircraft for fast transportation will help the efficiency of the interface between Ziv and the army in times of emergency and war,” he added.

“This is the way to connect the periphery to the center and provide us at Ziv and the whole north with a significant tool that breaks boundaries for our ability to function at all times,” he concluded.