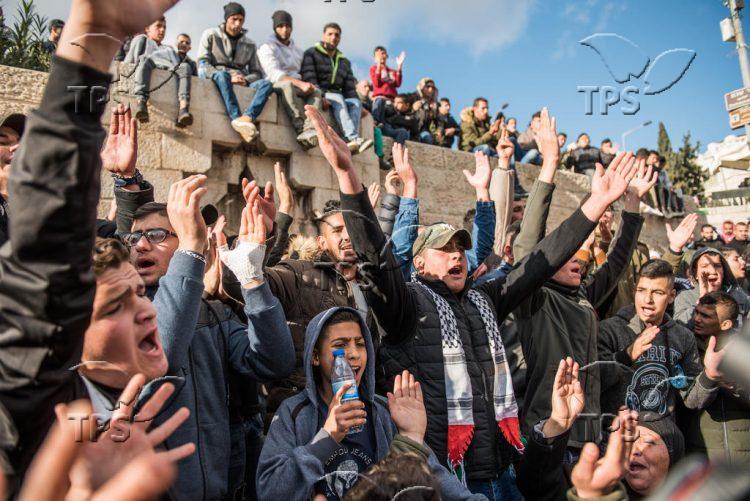 Jerusalem, 8 June, 2021 (TPS) -- Following the cancellation of the flag parade in Jerusalem planned by Israeli groups for Thursday, Muslims in the city have issued calls for a procession through the Damascus Gate to the Al-Aqsa Mosque, a “victory procession” following the Israel police’s decision to cancel the parade.

The time of the procession was set for five in the evening, the planned time of the canceled Israeli flag parade. Flyers were posted on social media under the headline “They will not pass here” and the organizers of the march called to “hunt the settlers and deter them.”

Residents of the eastern part of the city and Israeli Arabs are also called upon to demonstrate against Israel’s intention to renovate the Mughrabi Gate entering the Temple Mount from the Kotel area and following the fixation of a new sign on at Mughrabi Gate by Jewish organizations naming the gate the”Hillel Gate.”

However, the Palestinian Authority (PA) claims that the works are intended to “Judaize the city” and could damage the Al-Aqsa Mosque.

The Mufti of Jerusalem Muhammad Hussein also issued threats regarding the renovation of the Mughrabi Gate. The PA-appointed Mufti of Jerusalem, who was expelled two weeks ago during Friday prayers by Muslim worshippers for failing to address the Israeli campaign in Gaza and Hamas’ actions, is now warning Israel not to hold works on the bridge while claiming it is designed to allow police forces to move to the complex, and calling on Muslims to “protect al-Aqsa Mosque.”

The top of the Mughrabi and the gate need renovations due to the danger of collapse. In January 2005, the Israeli government decided to rehabilitate the Mughrabi Gate area, and in early 2007, the existing battery was dismantled for archeological excavations. The works took place amid Muslim riots led by the leader of the Northern Branch of the Islamic Movement Raed Salah.

In October 2011, the Jerusalem Municipality announced that there was an immediate danger to the bridge. The Western Wall Heritage Foundation erected a large wooden bridge as an alternative to a bridge that was closed but was dismantled two weeks later following pressure from Jordan.

Tensions in the city are also rising in light of the Jerusalem Municipality’s orders for the self-demolition of a number of illegal Arab buildings in the Silwan neighborhood near the Old City.

The demolition orders were posted on social media and drew a series of threats, and a protest tent was set up in the neighborhood, attended by foreign delegations.

Meanwhile, the Al-Akhbar newspaper reported that Palestinian terrorist organizations in the Gaza Strip have warned Israel against a return to violent clashes like last month, saying that “they are monitoring Israel” in light of the news on the canceled flag parade and the situation in the Sheikh Jarrah neighborhood. The shared headquarters for terrorist organizations called for “the masses in Jerusalem, the West Bank and inside (Israeli Arabs) to face the enemy and set fire to the ground beneath its feet.”