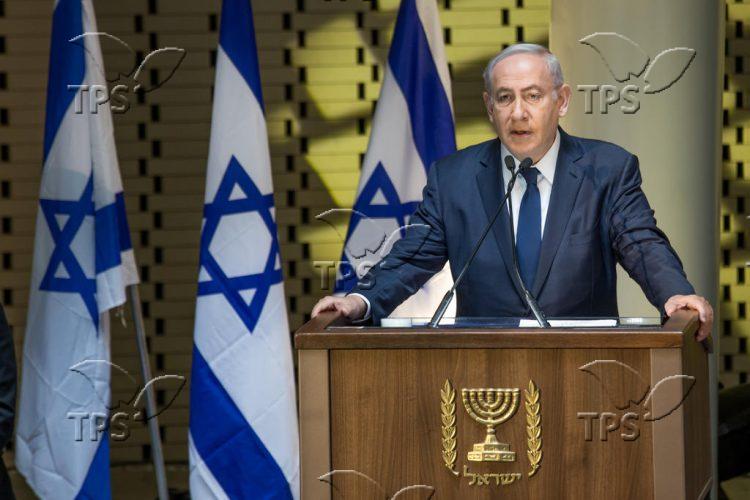 Netanyahu: Iran Will Fail like Haman Did 2,500 Years Ago

Jerusalem, 23 February, 2021 (TPS) -- Prime Minister Benjamin Netanyahu invoked the story of Purim and the downfall of the wicked Haman, who sought the Jewish nation’s destruction, to warn Iran against threatening Israel with nuclear weapons.

Speaking on Tuesday at the state memorial ceremony for Yosef Trumpeldor and his comrades who fell in defense of Tel Hai in the north, Netanyahu declared that “on the eve of Purim, I say to those who seek of our souls, Iran and its proxies in the Middle East: 2,500 years ago another Persian tyrant tried to destroy the Jewish people and just as he failed then – you will fail today.”

Purim, celebrated this year on Thursday through Sunday, marks the saving of the Jewish people from Haman, an Achaemenid Persian Empire official who plan to annihilate all the Jews and failed, as recounted in the Book of Esther.

“We will not allow your extremist and aggressive regime to acquire nuclear weapons,” Netanyahu told Iran. “We did not make the journey of generations through thousands of years back to the Land of Israel, to allow the hallucinatory regime of the ayatollahs to end the story of the resurrection of the Jewish people.”

Netanyahu’s cautionary remarks came just hours after Iran’s Supreme Leader Ayatollah Ali Khamenei said that Iran will continue its 20% enrichment of uranium, and will increase enrichment up to 60% “based on the country’s needs.”

“That clown of the global Zionism [Netanyahu] is saying that he will not allow Iran to attain nuclear weapons; however, it should be said that if the Islamic Republic had decided to attain [an] atomic bomb, the Zionists and powers bigger than them could not have been able to prevent it,” he stated.

In the meantime, the spokesman of Iran’s Supreme National Security Council (SNSC) Keivan Khosravi announced on Monday that the country will end the voluntary implementation of the Additional Protocol to the Non-Proliferation Treaty (NPT) and the UN nuclear watchdog’s inspections beyond the safeguards agreement on February 23.

Director-General of the United Nations International Atomic Energy Agency (IAEA) Rafael Grossi was informed of Iran’s move to stop the inspections during his visit to Tehran.