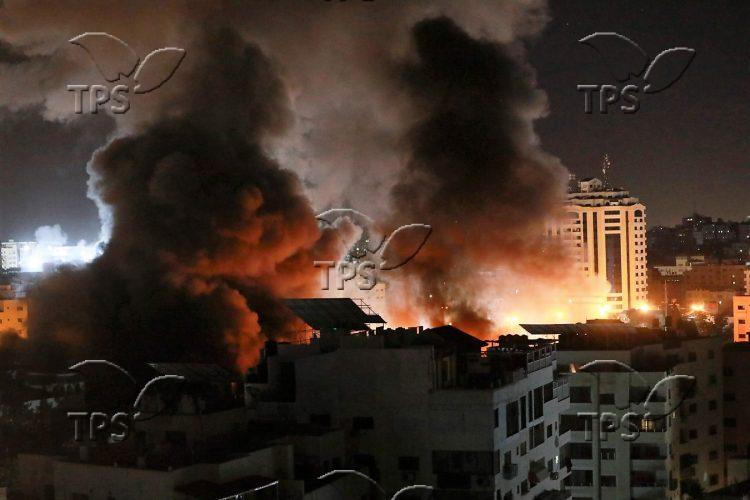 Jerusalem, 18 May, 2021 (TPS) -- Israel’s policy of warning Gazan civilians to evacuate buildings and areas ahead of an Israeli Air Force (IAF) strike on terror targets has been confirmed by the Palestinian Authority (PA), Palestinian Media Watch reported.

A PA official TV reporter in Gaza said that “when they [the residents] were informed that this tower will be attacked… the site was completely evacuated. The block, the street, the civilian buildings, and the residential buildings in the area – completely – including children and women, and we saw it.”

The conversation in question appears to be that incident documented by Israel’s Kan 11 news, in which the landlord can be heard saying: “How much, how much time do you need?… At least two or three hours? No one should come in? In other words, [I should] go to the tower, go to the tower and not let anyone come in?”

This clip was widely circulated throughout the Arabic world.

Itamar Marcus, director of PMW, noted that “Israel’s care for civilians is unique especially in the history of warfare against terror organizations who use civilians as human shields.”

He further noted that “the international community’s questioning Israel about civilian casualties exposes their great hypocrisy. When democracies fought ISIS (the Islamic State) and there were high civilian casualties, you never heard the UN and Western countries criticize!”

The IDF has stated that “Hamas deliberately and systematically places military targets within the civilian population, exposing their citizens to danger.”

An Israeli report Monday night said that that the IAF has called off some 20% of its planned strikes due to civilians’ presence in the vicinity of their targets,

The IDF, and the Air Force, in particular, attach paramount importance to accuracy and reducing harm to civilians. When planning an attack on a target, the IDF uses various tools, including advance warnings, “roof knocking,” the firing warning shots, target clearing operations and a variety of professional calculations carried out by the Operations Analysis Directorate and the Planning Directorate to minimize civilian casualties.

Any incident in which civilians are harmed is investigated by the IAF.

Prime Minister Benjamin Netanyahu told ambassadors and Foreign MInistry officials on Monday night that they should “show the truth and the facts to the world. Hamas commits a double war crime [by attacking Israeli civilians] and it uses its civilians as human shields. Israel does everything to avoid harming the uninvolved. One can guess what other countries would have done if they had been attacked in this way by a terrorist organization. “