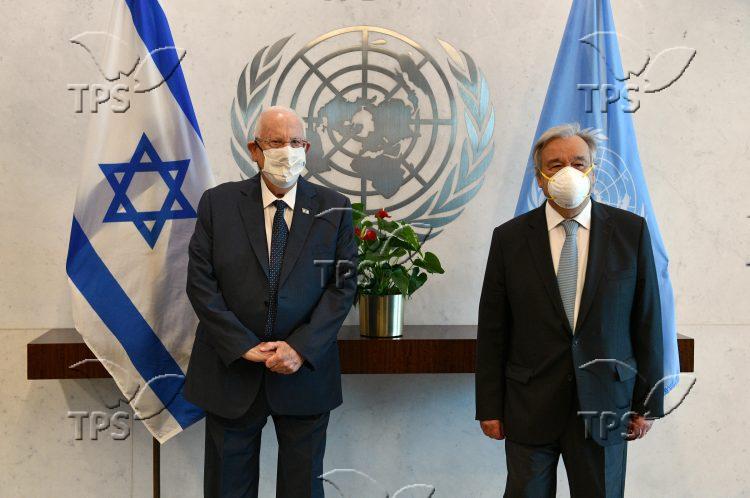 President Rivlin Meets with UN Chief, Ends Trip to US

Jerusalem, 30 June, 2021 (TPS) -- President of Israel Reuven Rivlin met on Tuesday with United Nations (UN) Secretary-General António Guterres at UN headquarters in New York in one of the last meetings on his farewell visit to the US, at the invitation of President Joe Biden.

Rivlin and Guterres were joined by Lea Goldin, mother of the late IDF officer Hadar Goldin, who was killed in 2014 during Operation Protective Edge and whose body is being held by Hamas in the Gaza Strip.

She spoke to Guterres about the “need to bring her son home” through strong messages from international institutions to Hamas.

Rivlin called out the UN chief over the bias against Israel at the UN and said it must end.

“Our region, the Middle East needs trust between people. Peace between Israel and the Palestinians will never ever be achieved by anti-Israeli resolutions or investigation committees,” he said.

“We are interested in continuing to work with the UN to provide humanitarian assistance to the people of Gaza, with whom we have no conflict. However, any agreement should include steps to return our soldiers and citizens, who are held by Hamas, a terrorist organization,” he added, following Goldin’s words.

Rivlin met later with a delegation of ambassadors from around the world in the US. Israeli Ambassador to the US and to the UN Gilad Erdan and Goldin also participated in the meeting.

At the beginning of his remarks, Rivlin sent a message to Chairman of the Palestinian Authority Mahmoud Abbas, saying “the state of Israel is here to stay, in eternity. Let us build trust between the peoples, let us return to talking about the future and let us aim for a brighter and better future for our peoples.”

Speaking about Iran, Rivlin said that the regime “is a threat and a danger to the whole world and is not interested in normalcy.”

“Between peace and war, Teheran made its choice. Teheran chooses death, supports terror, and prefers war over peace. So far, Iran has undermined normal life in Lebanon, Syria, Yemen, and Iraq. The current regime in Iran seeks to control the Persian Gulf. And above all they are focused on eliminating the State of Israel,” he warned.

The recent election of Ebrahim Raisi for president in the country, “an extremist responsible for the deaths of thousands of Iranians, demonstrates once again that the Iranian regime has no intention of ending its support for terror and its aggression against its neighbors. Their vision and policy is to counter normalization. To doom the whole region to endless conflict and misery.”

He called on the international community “to force Iran to cooperate with the International Atomic Energy Agency in order to protect the Middle East. Letting the Iranians maintain their nuclear program is irresponsible. Allowing this irresponsible regime to obtain a weapon of mass destruction is a serious and dangerous mistake.”

He further asked the diplomats to “join in efforts to bring Hadar and all of our captives home. Help us put an end to this ongoing nightmare. And thank you, Lea, for joining me here today.”

He ended his remarks by calling on the ambassadors to work together with Israel as a moderate state, allies, and partner for peace and prosperity.

“Building a brighter future requires opposing all forms of extremism and racism, including anti-Semitism which is, unfortunately, on the rise around the world. We call on the UN, and all governments, to show zero tolerance for all forms of anti-Semitism, and to use all tools at their disposal, from education to security and law enforcement, as well as adopting the IHRA definition of antisemitism, in order to counter these threats,” he said.

After meeting with President Biden, members of Congress, and leaders of the Jewish community, Rivlin returned to Israel on Wednesday in time for a state reception ceremony for President Dr. Frank-Walter Steinmeier of Germany and his wife on Thursday.