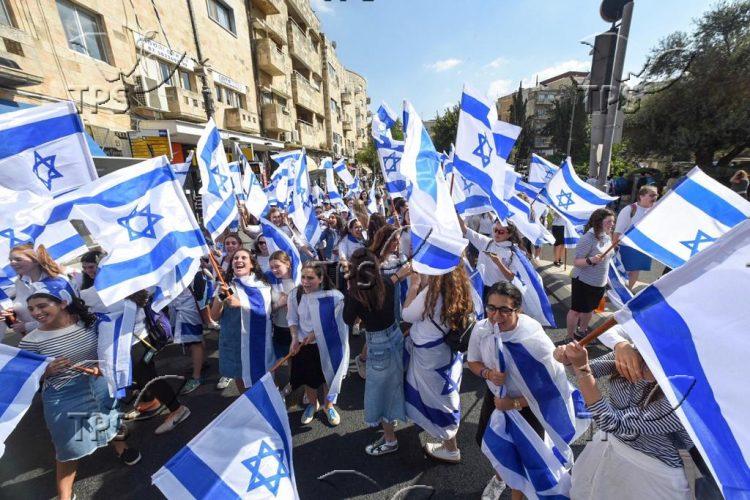 Jerusalem, 7 June, 2021 (TPS) -- Several politicians had harsh words for the police’s command after it announced Monday that it was canceling an Israeli march through Jerusalem.

Several organizations announced Sunday they intended to hold a second Flag March in Jerusalem on Thursday after the first one held on Jerusalem Day at the beginning of May was canceled amid a Hamas rocket attack on Jerusalem.

A number of organizations, some of them right-wing political movements, decided over the weekend to reorganize the Jerusalem Flag Parade, which takes place annually on Jerusalem Day.

Among the organizers of the parade are the Religious Zionist Party, the Ariel, Bnei Akiva, and Ezra youth movements, the Zionist Im Tirzu movement, the Gush Etzion Regional Council, and the Binyamin Regional Council.

The organizers stated that the purpose of the parade is to “unite the people of Israel after the difficult events we went through, and after the end of the march on Jerusalem Day following the terrorist threats.”

The first march this year was cut short amid rockets fired towards Jerusalem by Hamas. Hamas threatened to “defend” Jerusalem against this second march as well.

However, Chief of Police Yaakov Shabtai announced the police are banning the march competently, after initially giving tentative approval to a march a=on a shorter route, citing security concerns.

Prime Minister Benjamin Netanyahu said he would not intervene in the decision and was leaving it to the police to dictate policy.

Member of Knesset (MK) Bezalel Smotrich, head of the Religious Zionist party, said the decision was “a shameful surrender to terrorism and Hamas’ threats.”

“The people of Israel are alive and worthy of a different leadership. Stronger and more determined. We will continue to walk proudly through the streets of all of Jerusalem and settle everywhere in it,” he said.

MK Itamar Ben Gvir, of the Otzmah Yehudit party, sharply criticized the police commissioner, who he said “surrenders to Hamas and folds in the face of the terrorist organizations, and folds the [Israeli] flag. Unfortunately, the Commissioner of Police is continuing the line of surrender and succumbing to terrorism.”

He announced he will march the full route of the planned parade around the Old City of Jerusalem, including through the Muslim Quarter while using his parliamentary immunity, and he called on the Knesset Members to join him and “exercise our immunity and the sovereignty of the State of Israel in Jerusalem.”

Im Tirtzu CEO Matan Peleg said that his organization was “saddened by the police’s decision to not allow a march with Israeli flags in Israel’s capital city. This is a severe mistake by the police that harms democracy and surrenders to terrorism.”

“The State of Israel needs to stop the dangerous decline that it is experiencing on all fronts. The IDF is restricting navigation exercises in the Negev out of fear; in Jaffa soldiers can’t walk in public with their uniforms; residents of mixed Jewish-Arab cities are being called settlers and are being targeted; and in the capital of Israel, terrorist groups are dictating whether or not people can march with Israeli flags. If we don’t wake up, there won’t be a state left for our children,” he warned.