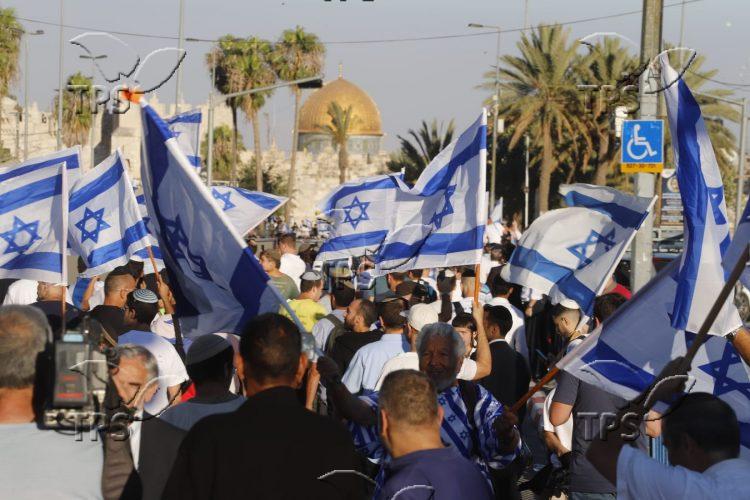 WATCH: Despite Hamas Threats, Thousands of Israelis March in Jerusalem

Jerusalem, 16 June, 2021 (TPS) -- Some 10,000 Israelis marched in the heart of Jerusalem on Tuesday and completed the Flag Parade that was cut short by a Hamas attack last month, despite Hamas’ threats to attack again.

The thousands of marchers, carrying flags and singing songs, marched from Haneviim Street to Sha’ar Shechem (Damascus Gate) at the entrance to the Old City, continued to the Jaffa Gate and entered the Old City through the Muslim and Jewish Quarter, and ended with a mass prayer at the Kotel (Western Wall).

17 Arabs were arrested during the event for attacking the marchers and disturbing the peace.

The organizations and municipalities that participated in the event thanked the Israel Police for securing the parade and called “on the people of Israel to continue marching proudly with Israeli flags on all the streets of Jerusalem and throughout the Land of Israel.”

“Terrorism will never defeat the people of Israel,” they stated.

The police initially banned the march following threats by Hamas to attack Israel again, as it did during the Flag March conducted on Jerusalem Day last month.

Several organizations announced they intended to hold a second Flag March in Jerusalem after the first one held on Jerusalem Day at the beginning of May was canceled amid a Hamas rocket attack on Jerusalem.

The organizers stated that the purpose of the parade is to “unite the people of Israel after the difficult events we went through, and after the end of the march on Jerusalem Day following the terrorist threats.”

Matan Peleg, chairman of the Im Tirzu Zionist movement, one of the organizers of the event, stated that “Jerusalem has never been freer and safer for all denominations and religions than under Israeli sovereignty. We must not fold the flags and give up these historic assets because of terrorist organizations and other evil seekers and we are glad that thousands of people chose to wave Israeli flags proudly and fearlessly.”

“This is a first-rate value-based, educational, national and Zionist event. We are sending a clear message against terrorist organizations – Jerusalem is the eternal capital of Israel,” he stated.