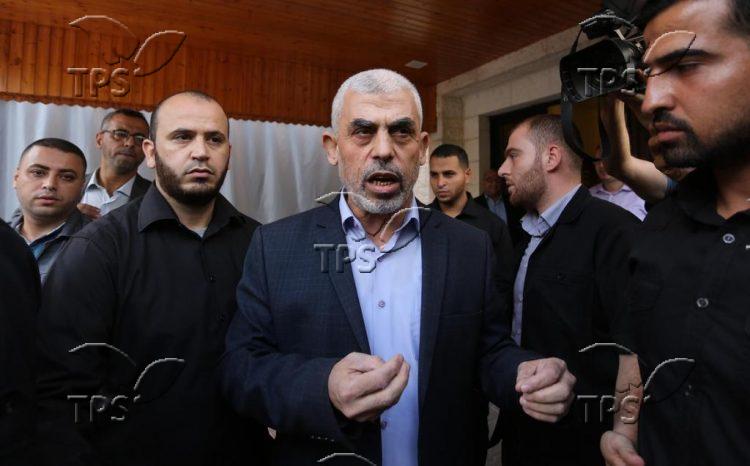 Yahya Sinwar and Nizar Awadallah are now approaching the fourth round of voting and it is clear that the announcement on the identity of the new political bureau head in the Gaza Strip will be postponed to next week, although the results may be already clear Wednesday.

The media in the Gaza Strip and abroad published Tuesday night the news of the imminent victory of Nizar Awadallah, although by a small margin, even though no official announcement came from Hamas.

However, along with Hamas’ reassuring remarks about the election process taking place in a good atmosphere, sources in the Gaza Strip told TPS that the early publications Tuesday night were based on Hamas figures close to Khaled Mashaal, the head of the Qatari camp and who is considered close to Awadallah.

Sources claim that it was Mashaal’s men who leaked the results to the Arab media early on to promote Awadallah’s victory, even though Yahya Sinwar led in the first round when he won 155 votes against 144 votes for Awadallah. The victor requires a bit more than 50% of the votes.

Sources claim that the early leak by Khaled Mashaal’s supporters points to tensions between the Qatari camp, led by Mashaaal who is running for the chairmanship of Hamas’ political bureau, and its rival, Ismail Haniya, who is receiving Sinwar’s support.

“It is possible that the struggle between Mashaal and Haniya is responsible for the fact that no decision was reached between Awadallah and Sinwar and the various publications that were reported last night,” a Palestinian source told TPS.

Claims in the Gaza Strip say that it was Qatar that intervened to prevent Sinwar’s failure and those who claim so also note the presence of the Qatari ambassador, Muhammad Amadi, in the Gaza Strip, during the election. However, other sources reject these claims, as Awadallah is considered close to Khaled Mashaal and the Qatari-Turkish axis. One way or another, it seems that behind the lack of a decision, there are struggles between the various camps in Hamas, and especially in the Gaza Strip.

Sources in the Gaza Strip emphasize that it is not for nothing that the Turkish Anadolu agency published the news of an advantage for Awadallah, while the Lebanese Al Mayadin close to Hezbollah and Iran, announced that even after a third round, no decision has been reached.

Various sources indicate that alongside the political rivalry within Hamas and between the camps, it is possible that the interpretation of Hamas’ election procedures also led to great embarrassment. On the one hand, sources claim that according to the secret procedures, the winner of the election is the one who obtained 50 percent of the votes and one more vote.

On the other hand, there are those who claim in Hamas that if no such majority was presented, then the one who won the most votes is the winner. Yahya Sinwar obtained 160 votes in the third round and lacks a single vote to decide the fight against Awadallah.

It should be noted in this regard that Yahya Musa, a senior Hamas figure and a member of the Palestinian Legislative Council, has in recent days attacked the secret Hamas election system, which he says disguises bias toward various elements in the movement and explained that the secret system effectively overshadows the lack of transparency and democracy in the Hamas election process. His remarks, which caused a stir in Hamas due to them being very unusual, now join the storm of the confrontation between Sinwar and Awadallah.

The news that was circulated last night, although not from an official source in Hamas, caused a great deal of embarrassment and exposed the internal political drama behind the scenes, just before the general elections in the Palestinian Authority. Last night, Hamas was supposed to end the election process in the Gaza Strip and continue ahead of the elections in the “foreign district,” one of its four constituencies, and turn to the formation of its new Shura Council and the Politburo by the end of the month.

Hamas, although denying that the behind-the-scenes rivalry is responsible for the drama in the Gaza Strip, reaffirmed that Awadallah is close to Qatar and Mashaal, which increases tensions ahead of the Hamas general election, which Mashaal and Haniya are running for.

Recently, Hamas officials claimed that Mashaal may remain in the political bureau, while Haniya will be the leader of Hamas abroad, as a compromise.

The elections in the Gaza Strip are being held in an expedited procedure due to the need to formulate the Hamas list for the general elections in the Palestinian Authority this May. 18 election committees have been established in Hamas to oversee the internal elections.

The Hamas elections in the Gaza Strip took place in seven different areas, in which many thousands elected the 320 members of the Shura Council who are now electing the Hamas leader in the Gaza Strip, choosing between Sinwar, Awadallah, and another three candidates. In this matter, too, various rumors circulated that the number of members of the Shura Council was supposed to be only 250.

Nizar Awadallah, born in 1957, married with six children, holds a degree in civil engineering from Ein Shams University in Cairo, and was previously deputy head of the Shura Council in the Gaza Strip. A resident of the village of Hamama near Ashkelon and considered very close to Khaled Mashaal. Sources in the Gaza Strip claim that his relationship with Muhammad Dahlan is also considered to be quite close.

One of the founders of Hamas alongside Sheikh Ahmad Yassin and the former Secretary-General of the Islamic Majmaa between the years 2000-1982. Awadallah, who was imprisoned in Israel for six years, between 1989 and 1995, advanced in the Hamas organization until he became a member the Politburo in 2009.

His house was bombed twice by Israel during Operation Cast Lead in 2009 and Protective Edge in 2014. Awadallah participated in talks leading up to the Shalit deal and headed the delegation that came from Damascus to the Gaza Strip to promote the deal.

It is possible that the close battle between the two indicates a deep disappointment from Sinwar, who failed to record a significant achievement in the Gaza Strip even though he pledged to improve the civilian situation. Under him, the reconciliation with Fatah was not achieved, the civil distress in Gaza is still acute and is motivating him to seek understandings with Israel, and a prisoner deal has not been reached, despite his efforts.

On the other hand, although he belongs to Hamas’ military wing, Sinwar’s tenure in the last four years in the Gaza Strip has been one of the quietest vis-à-vis attacks on Israel.

Sinwar is considered the one who came up with the idea of ​​the Marches of Return and worked to bring a series of understandings with Israel as the one responsible for making decisions in the Gaza Strip. Along with Haniya, whom he now supports, the Gaza leader managed to move over the decision-making center from abroad to Gaza.

Haniya and Sinwar, as those who are close to the damage caused to Gaza by the rounds of violence against Israel, worked to calm the situation and achieve understanding with Israel to prevent further damage. Palestinian sources estimate that if control is restored to the Hamas leadership abroad at the end of the election, a change in relations between Hamas and Israel is also expected, in a negative and dangerous fashion.