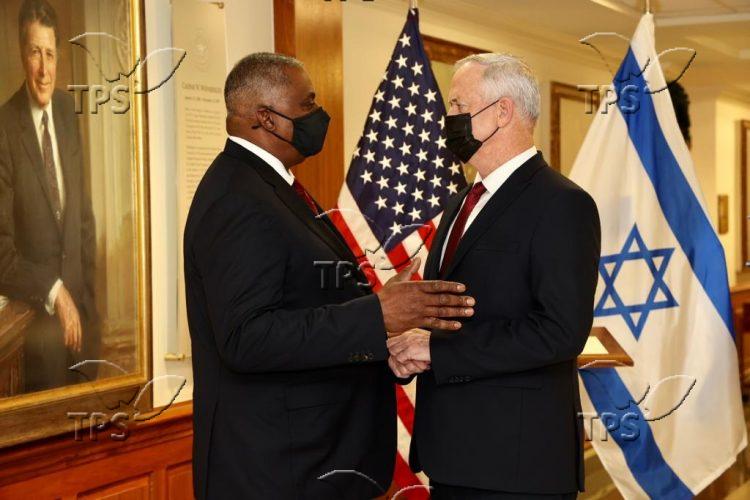 Jerusalem, 9 December, 2021 (TPS) -- Israel’s Minister of Defense Benny Gantz flew to Washington Wednesday for an official visit. He met with his American counterpart, the US Secretary of Defense Lloyd Austin.

Gantz and Austin held what they described as a meaningful conversation that reflected the historic bond and strategic ties between the U.S. and Israel.

The Ministers discussed emerging challenges and opportunities in the region, with a particular focus on the developing challenge vis-à-vis the Iranian nuclear program and its regional aggression.

Gantz, in his public comments, spoke about the continued threat posed by Iran. Gantz commented that that he looks forward to deepening the dialogue and cooperation between Israel and the US on Iran, including on topics of military readiness. “Iran is the biggest threat to global and regional peace and stability and building an existential threat to Israel,” he declared.

The Iranian threat has been the main topic of discussion for Israeli leaders in their meetings with their foreign counterparts. Prime Minister Naftali Bennett, Foreign Minister Yair Lapid and President Isaac Herzog have all highlighted the Iranian threat in their public comments when meeting with foreign dignitaries both in Israel and abroad. They have also emphasized the matter in their private meetings.

The issue is especially important to Israel’s government this week as talks between the US, EU, China, Russia and other nations with Iran on its nuclear program resumed in Vienna.

“Iran is not just a threat to our physical security. Iran poses a concrete threat to our way of life and our shared values,” Minister Gantz said. “In its aspirations to become a hegemon – Iran seeks to destroy all traces of freedom, human dignity and peace in the Middle East and beyond. The nuclear program is a means to its hegemonic goals.”

During the meeting, Gantz thanked Secretary Austin for the ongoing cooperation between the respective defense establishments, which is unparalleled on all levels. He also expressed gratitude for Secretary Austin’s personal commitment and contribution to strong US-Israel relations and to the security of the State of Israel.

Minister Gantz and Secretary Austin also touched on the importance of maintaining Israel’s Qualitative Military Edge (QME) in an increasingly unstable region, and the critical need for the replenishment of Israel’s air defense systems.

On this Gantz commented, “Israel’s QME will not only guarantee the safety of our citizens but will also enable us to leverage the positive trends in the region. Only a strong, secure Israel can extend its hand in peace to its neighbors. Only a strong and secure Israel can work with its new partners to expand normalization and create alliances against emerging threats.”

Earlier in the day Benny Gantz met with AIPAC leadership, including its President Betsy Korn, Arne Christenson & Marvin Feuer. “A fitting start to our day – reviewing the strategic challenges ahead of us, while reaffirming the importance of a strong & enduring US-Israel friendship,” he tweeted about the meeting.

Before his meetings at the Pentagon and State Department, Gantz began his day in Washington with a preparatory meeting with Israel’s ambassador to the US Mike Herzog.